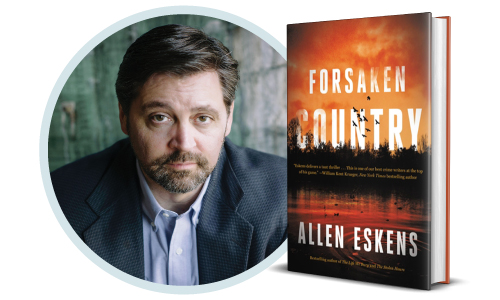 Join us for Allen Eskens discussing Forsaken Country. Purchase the book or sign up below to receive a link to this virtual event via email.

Three fathers collide far beyond the reach or safety of the law in this breathtaking thriller from the bestselling and beloved author of The Stolen Hours and The Life We Bury.

Max Rupert has left his position as a Minneapolis homicide detective to live in solitude. Mourning the tragic death of his wife, he's also racked by guilt—he alone knows what happened to her killer. But then the former local sheriff, Lyle Voight, arrives with a desperate plea: Lyle’s daughter Sandy and his six-year-old grandson Pip have disappeared. Lyle’s certain Sandy's ex-husband Reed is behind it, but the new sheriff is refusing to investigate.

When Max reluctantly looks into their disappearance, he too becomes convinced something has gone very wrong. But the closer Max and Lyle get to finding proof, the more slippery Reed becomes, until he makes a break for the beautiful but formidable Boundary Waters wilderness with vulnerable Pip in tow.

Racing after the most dangerous kind of criminal—a desperate father—and with the ghosts of their own pasts never far behind, Max and Lyle go on the hunt within a treacherous landscape, determined to bring an evil man to justice, and to bring a terrified child home alive.

Allen Eskens is the USA Today bestselling author of The Life We Bury, which has been published in twenty-six languages, and five other novels, most recently The Stolen Hours, The Shadows We Hide, and Nothing More Dangerous. His books have won the Barry Award, the Rosebud Award, the Silver Falchion Award, and the Minnesota Book Award. Eskens is a former criminal defense attorney and lives with his wife, Joely, in greater Minnesota.