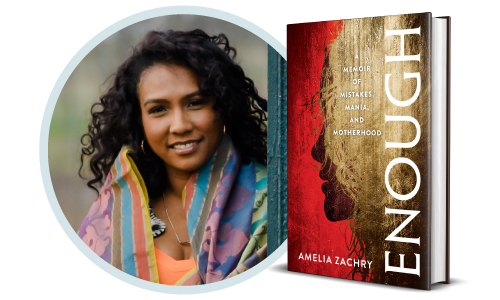 Saturday, November 5 at 11am ET

Join us for Amelia Zachry signing Enough: A Memoir of Mistakes, Mania, and Motherhood.

A bicultural child of a Malay mother and an Indian father, Amelia Zachry was different from the get-go, never quite fitting in. In this raw, inspiring memoir, she chronicles the long, winding journey that brought her from Kuala Lumpur, Malaysia, to Kentucky, USA – the place she and her family now call home.

Amelia was nineteen years old, her future wide open, when a fellow student from her Kuala Lumpur university sexually assaulted her. After that night, she felt sullied – and convinced that what had happened was her fault. In the months and years that followed, she spiraled, first into isolation and then into promiscuity, as she attempted to try to take back some of the power that had been stripped from her that night. Eventually, she met the man who would become her husband and greatest advocate, Daniel, and began to emerge from that dark place – but even he couldn't fight her demons for her. In her late twenties, Amelia was diagnosed with PTSD and bipolar II disorder, both of which would go on to shape her adult life as an individual, a wife, and a mother.

A memoir of trauma and healing, mental illness and resilience, culture shock and new beginnings, devastation and triumph, Enough is one woman's story of learning to make peace with the fact that things are as they should be, even if she sometimes wishes they were different – and of discovering that however far away it may seem, there is always a light at the end of the tunnel.

Enough: A Memoir of Mistakes, Mania, and Motherhood (Paperback)