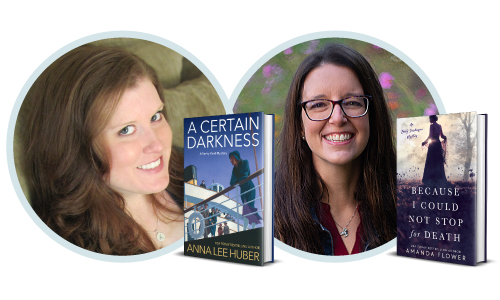 Join us for Anna Lee Huber & Amanda Flower discussing and signing A Certain Darkness & Because I Could Not Stop for Death.

The 1920s are off to an intriguing start, but even as a new decade dawns, the shadow of The Great War persists…

March 1920: Life has turned unsettlingly quiet for former British Intelligence agent Verity Kent and her husband, Sidney. But even that false calm is about to end. As threats remain, the French authorities soon request Sidney’s help with a suspect who claims to have proof of treason—shortly before she is assassinated. And Verity, too, is called to investigate a mystery.

The murder of a Belgian lawyer aboard a train seems at first to be a simple case of revenge. But the victim was connected to British Intelligence, and possessed papers detailing the sinking of a gold-laden German ship during the war.

As Verity and Sidney dig deeper, they discover their cases are intertwined—and a lethal adversary persists. Officially, the Great War may be over, but this is a battle of nerves and wits they cannot afford to lose…

Because I Could Not Stop for Death

Emily Dickinson and her housemaid, Willa Noble, realize there is nothing poetic about murder in this first book in an all-new series from USA Today bestselling and Agatha Award–winning author Amanda Flower.

Willa Noble knew it was bad luck when it was pouring rain on the day of her ever-important job interview at the Dickinson home in Amherst, Massachusetts. When she arrived late, disheveled with her skirts sodden and filthy, she'd lost all hope of being hired for the position. As the housekeeper politely told her they'd be in touch, Willa started toward the door of the stately home only to be called back by the soft but strong voice of Emily Dickinson. What begins as tenuous employment turns to friendship as the reclusive poet takes Willa under her wing.

Tragedy soon strikes and Willa's beloved brother, Henry, is killed in a tragic accident at the town stables. With no other family and nowhere else to turn, Willa tells Emily about her brother’s death and why she believes it was no accident. Willa is convinced it was murder. Henry had been very secretive of late, only hinting to Willa that he'd found a way to earn money to take care of them both. Viewing it first as a puzzle to piece together, Emily offers to help, only to realize that she and Willa are caught in a deadly game of cat and mouse that reveals corruption in Amherst that is generations deep. Some very high-powered people will stop at nothing to keep their profitable secrets even if that means forever silencing Willa and her new mistress....

Amanda Flower is a USA Today bestselling and Agatha Award-winning author of over thirty-five mystery novels. Her novels have received starred reviews from Library Journal, Publishers Weekly, and Romantic Times, and she had been featured in USA Today, First for Women, and Woman’s World. She currently writes for Penguin-Random House (Berkley), Kensington, Hallmark Publishing, Crooked Lane Books, and Sourcebooks. In addition to being a writer, she was a librarian for fifteen years. Today, Flower and her husband own a farm and recording studio, and they live in Northeast Ohio with their two adorable cats, Editors Cheeps and Tummy.