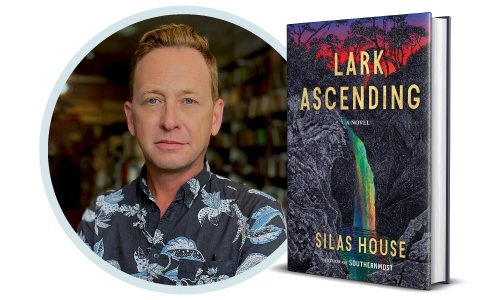 Join us for Silas House discussing and signing Lark Ascending.  Feel free to join us or use OPTIONAL RSVP below.  Additionally, Silas will be signing and personalizing pre-orders/orders through December 25, 2022.  Please order below for a signed copy to be sent to you.  If you would like your book personalized, please put personalization request under notes when submitting your order.

“In Lark Ascending, Silas House casts an irresistible spell, conjuring a near future that is both familiar and unbearable, illuminating the brutality and suffering that our own thoughtless age seems determined to invoke. But Lark Ascending is not merely, or even mainly, a tale of pain and grief. This beautiful book is shot through with such tenderness and humanity, such love and courage and beauty and hope, that it feels almost like a prayer.” — Margaret Renkl, author of Late Migrations

A riveting story of survival and hope, set in the not-too-distant future, about a young man forced to flee the United States and seek refuge across the Atlantic.

As fires devastate most of the United States, Lark and his family secure a place on a refugee boat headed to Ireland, the last country not yet overrun by extremists and rumored to be accepting American refugees. But Lark is the only one to survive the trip, and once ashore, he doesn’t find the safe haven he’d hoped for. As he runs for his life, Lark finds an abandoned dog who becomes his closest companion, and then a woman in search of her lost son. Together they form a makeshift family and attempt to reach Glendalough, a place they believe will offer protection. But can any community provide the safety that they seek?

For readers of novels such as Station Eleven, The Dog Stars, and Migrations, Lark Ascending is a moving and unforgettable story of friendship, family, and healing.

Silas House is the New York Times bestselling author of seven novels, one book of creative nonfiction, and three plays. His writing has appeared in the New York Times, the Atlantic, the Advocate, Time, Garden & Gun, and other publications. A former commentator for NPR’s All Things Considered, House is the winner of the Nautilus Award, the Storylines Prize from the NAV/New York Public Library, an E. B. White Honor, and many other awards.

Lark Ascending by Silas House (for pick-up at the event)