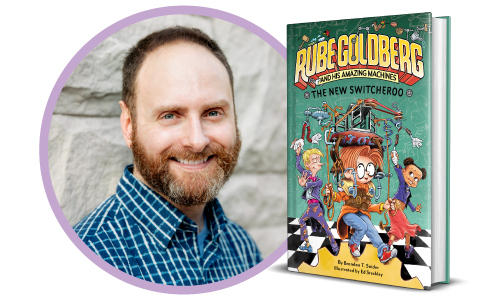 Join us for Brandon T. Snider in conversation with Ed Steckley and Jennifer George discussing The New Switcheroo (Rube Goldberg and His Amazing Machines #2). Purchase the book or RSVP below to receive a link to attend this virtual event.

After unintentionally unmasking a criminal mastermind at his school’s Contraption Convention, Rube Goldberg—and his inventions—are the talk of the sixth grade. Rube’s star is on the rise, and it’s a lot of pressure. What if he’s lost his mojo? There’s no time to wonder, because Rube and his two best friends, Boob and Pearl, are busy planning Pearl’s campaign for class president. With the Switcheroo Dance a weekend before the big election, Pearl’s path to victory is set. That is, until a new mystery strikes the town. Rube is eager to bring Zach into the fold, but Boob and Pearl can’t help but wonder if Rube’s mysterious new friend is hiding something . . . will Rube get his mojo back in time to unravel the mystery and save Pearl’s campaign?

Hijinks and hilarity abound in this dynamic follow-up to Rube Goldberg and His Amazing Machines, written by bestselling author Brandon T. Snider and featuring black-and-white illustrations by Ed Steckley.

Brandon T. Snider is the bestselling author of the award-winning Dark Knight Manual, as well as the Avengers: Infinity War: The Cosmic Quest series. Additionally, he has written books featuring Cartoon Network favorites such as Adventure Time and Regular Show, Marvel’s Spider-Man and Black Panther, plus pop-culture icons such as Justice League, Star Wars, and The Muppets. He lives in New York City, where he is a member of the Writers Guild of America and SAG-AFTRA.

Jennifer George is president of the Rube Goldberg Institute for Innovation and Creativity. George is Rube Goldberg’s granddaughter and lives and works in New York City.

The New Switcheroo (Rube Goldberg and His Amazing Machines #2) (Hardcover)