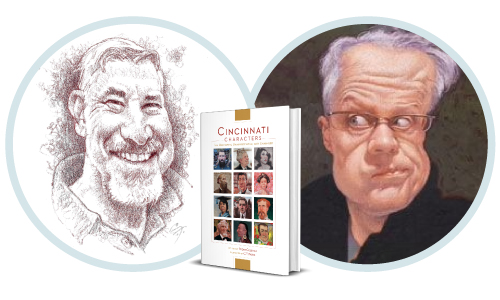 Join us for Brent Coleman in conversation with C. F. Payne discussing and signing Cincinnati Characters: The Unknown, Unappreciated, and Unhinged. Optional RSVP is below but not required to attend the event.

When, in 1988, Brent Coleman drove 2,300 miles from Sacramento to join the Cincinnati Enquirer’s editing staff, he knew little of Cincinnati beyond TV’s “WKRP.” In between then and the publication of Cincinnati Characters, he learned to love what, initially, seemed like a foreign city. Yet he became as familiar as a native with Cincinnati, then and now. He bought a Tudor revival home in West Price Hill in 1997 and became curious about the neighborhood’s name. Seventeen years later, WCPO.com gave him the chance to research and write about Rees E. Price, the character in chapter one. The experience lit a torch. Thirty entertaining stories and C.F. Payne illustrations bring to life long gone people who achieved infamy or fame, or whose names grace regional communities, streets, buildings and Cincinnati landmarks. These seldom-told stories really are oldies but goodies. Enjoy!