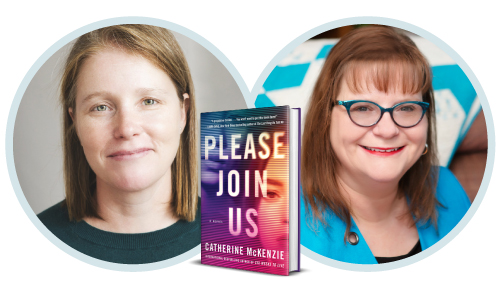 Join us for Catherine McKenzie in conversation with Jessica Strawser discussing and signing Please Join Us.

A “propulsive thriller about secret organizations, hidden agendas, and the lengths one woman will go to reclaim her life” (Laura Dave, author of Reese’s Book Club Pick The Last Thing He Told Me) from USA TODAY bestselling author Catherine McKenzie.

At thirty-nine, Nicole Muller’s life is on the rocks. Her once brilliant law career is falling apart. She and her husband, Dan, are soon to be forced out of the apartment they love. After a warning from her firm’s senior partners, she receives an invitation from an exclusive women’s networking group, Panthera Leo. Membership is anonymous, but every member is a successful professional. It sounds like the perfect solution to help Nicole revive her career. So, despite Dan’s concerns that the group might be a cult, Nicole signs up for their retreat in Colorado.

Once there, she meets the other women who will make up her Pride. A CEO, an actress, a finance whiz, a congresswoman: Nicole can’t believe her luck. The founders of Panthera Leo are equally as impressive. They explain the group’s core philosophy: they’re a girl’s club in a boy’s club world.

Nicole is all in. And when she gets home, she soon sees dividends. Her new network quickly provides her with clients that help her relaunch her career, and a great new apartment too. The favors she has to provide in return seem benign. But then she’s called to the congresswoman’s apartment late at night where she’s pressed into helping her cover up a crime. And suddenly, Dan’s concerns that something more sinister is at play seem all too relevant. Can Nicole extricate herself from the group before it’s too late? Or will joining Panthera Leo be the biggest mistake of her life?

Catherine McKenzie was born and raised in Montreal, Canada. A graduate of McGill in History and Law, Catherine practiced law for twenty years before leaving the practice to write full time. An avid runner, skier, and tennis player, she’s the author of numerous bestsellers including Hidden, Fractured, The Good Liar, and I’ll Never Tell. Her works have been translated into multiple languages and The Good Liar, You Can’t Catch Me and I’ll Never Tell have all been optioned for development into television series.

Jess Montgomery is the author of the Kinship Historical Mysteries, set in 1920s Appalachian Ohio and inspired by Ohio’s true first female sheriff. Under her given name, she writes the “Level Up Your (Writing) Life” column for Writer’s Digest. She also hosts the “Tea with Jess: Chatting with Authors & Artists” in which creatives share their journeys and insights. She was formerly a newspaper columnist, focusing on the literary life, authors and events of her native Dayton, Ohio for the Dayton Daily News. She is a three-time recipient of the Individual Excellence Award in Literary Arts from Ohio Arts Council, a two-time recipient of the Montgomery County (Ohio) Arts & Cultural District (MCAD) Artist Opportunity Grant, and has been a John E. Nance Writer in Residence at Thurber House (Columbus, Ohio).

Please Join Us: A Novel (Hardcover)