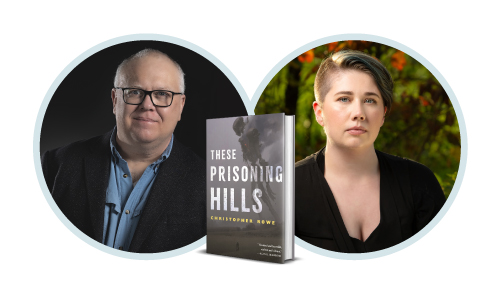 Join us for Christopher Rowe in conversation with Ashley Blooms discussing and signing These Prisoning Hills.

Fortran harrows all the nations.

In a long-ago war, the all-powerful A.I. ruler of the Voluntary State of Tennessee—Athena Parthenus, Queen of Reason—invaded and decimated the American Southeast. Possessing the ability to infect and corrupt the surrounding environment with nanotechnology, she transformed flora, fauna, and the very ground itself into bio-mechanical weapons of war.

Marcia, a former captain from Kentucky, experienced first-hand the terrifying, mind-twisting capabilities of Athena’s creatures. Now back in the Commonwealth, her retirement is cut short by the arrival of federal troops in her tiny, isolated town. One of Athena’s most powerful weapons may still be buried nearby. And they need Marcia’s help to find it.

Christopher Rowe has been a finalist for the Hugo, Nebula, World Fantasy and Theodore Sturgeon Awards. His stories have been frequently reprinted, translated into a half-dozen languages around the world, and praised by the New York Times Book Review. His early fiction was collected in a chapbook, Bittersweet Creek and Other Stories, by Small Beer Press. His first novel, Sandstorm, was published by Wizards of the Coast in 2011. He is a student at the Bluegrass Writers Studio, the MFA program of Eastern Kentucky University, and lives in a hundred-year-old house in Lexington, Kentucky, with his wife, novelist Gwenda Bond.

Ashley Blooms is the author of Where I Can’t Follow and Every Bone a Prayer, which was long-listed for the Crook’s Corner Book Prize. Born and raised in Cutshin, Kentucky, Blooms received her MFA as a John and Renee Grisham Fellow at the University of Mississippi. Her short stories have appeared in The Year’s Best Dark Fantasy & Horror, Fantasy & Science Fiction, and Strange Horizons, among others. Her nonfiction has appeared in the Oxford American. She’s been awarded scholarships from the Clarion Writer’s Workshop and Appalachian Writer’s Workshop, served as fiction editor for the Yalobusha Review, and worked as an editorial intern and first reader for Tor.com. She currently lives in Kentucky with her partner and dog, where she is at work on a middle grade book.