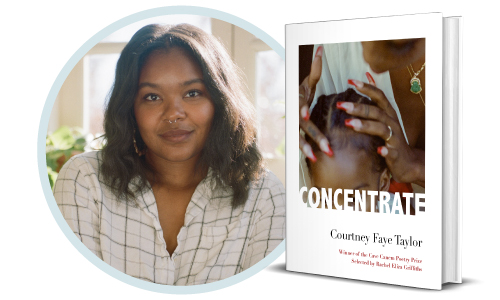 Join us for Courtney Faye Taylor discussing and signing Concentrate.

In her virtuosic debut, Courtney Faye Taylor explores the under-told history of the murder of Latasha Harlins—a fifteen-year-old Black girl killed by a Korean shop owner, Soon Ja Du, after being falsely accused of shoplifting a bottle of orange juice. Harlins’s murder and the following trial, which resulted in no prison time for Du, were inciting incidents of the 1992 Los Angeles uprising, and came to exemplify the long-fraught relationship between Black and Asian American communities in the United States. Through a collage-like approach to collective history and storytelling, Taylor’s poems present a profound look into the insidious points at which violence originates against—and between—women of color.

Concentrate displays an astounding breadth of form and experimentation in found texts, micro-essays, and visual poems, merging worlds and bending time in order to interrogate inexorable encounters with American patriarchy and White supremacy manifested as sexual and racially charged violence. These poems demand absolute focus on Black womanhood’s relentless refusal to be unseen, even and especially when such luminosity exposes an exceptional vulnerability to harm and erasure. Taylor’s inventive, intimate book radically reconsiders the cost of memory, forging a path to a future rooted in solidarity and possibility. “Concentrate,” she writes. “We have decisions to make. Fire is that decision to make.”

Courtney Faye Taylor is a writer and visual artist. She is a winner of the Discovery/Boston Review Poetry Prize and an Academy of American Poets Prize. Her work can be found in Poetry, The Nation, Best New Poets 2020, and elsewhere.