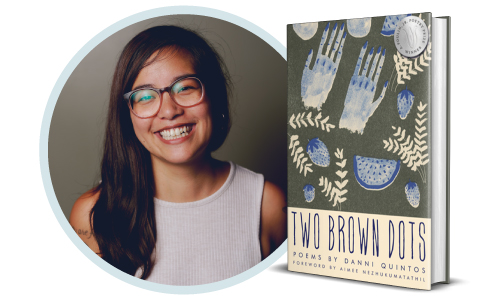 Selected by Aimee Nezhukumatathil as the winner of the A. Poulin, Jr. Poetry Prize, Danni Quintos carves a space for brown girls and weird girls in her debut collection of poems.

Two Brown Dots explores what it means to be a racially ambiguous, multiethnic, Asian American woman growing up in Kentucky. In stark, honest poems, Quintos recounts the messiness and confusion of being a typical '90s kid – watching Dirty Dancing at sleepovers, borrowing eye shadow out of a friend's caboodle, crushing on a boy wearing khaki shorts to Sunday mass – while navigating the microagressions of the neighbor kids, the awkwardness of puberty, and the casual cruelties of fellow teenagers. The mixed-race daughter of a dark skinned Filipino immigrant, Quintos retells family stories and Phillipine folklore to try and make sense of an identity with roots on opposite sides of the globe.

With clear-eyed candor and a wry sense of humor, Quintos teases the line between tokenism and representation, between assimilation and belonging, offering a potent antidote to the assumption that "American" means "white." Encompassing a whole journey from girlhood to motherhood, Two Brown Dots subverts stereotypes to reclaim agency and pride in the realness and rawness and unprettyness of a brown girl's body, boldly declaring: We exist, we belong, we are from here, and we will continue to be.

Danni Quintos is the author of Two Brown Dots, which won the 20th annual A. Poulin, Jr. Poetry Prize. She is also the author of PYTHON, an ekphrastic chapbook featuring photography by her sister, Shelli Quintos. Her work has appeared in Best New Poets 2015, Cream City Review, Day One, Pluck!, Salon, and elsewhere. Her knitting has appeared on the shoulders and heads of many writers and artists, who are also friends and teachers. She received her MFA in Poetry from Indiana University. A Kentuckian, a mom, an educator, and an Affrilachian Poet, Quintos lives in Lexington, KY.