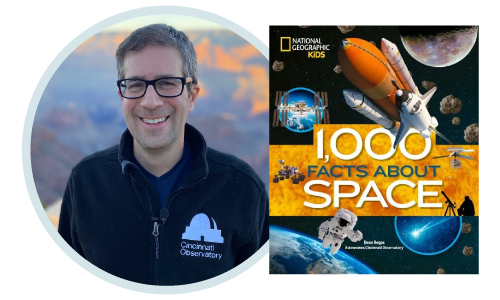 Join us for Dean Regas discussing and signing 1000 Facts About Space. Optional RSVP is below but not required to attend the event.

BLAST OFF into the WONDERS OF OUTER SPACE with ONE THOUSAND INCREDIBLE FACTS! Good for all ages.

Did you know … that one of Saturn’s moons is so hollow it would float in water? That the largest known star is 3.69 billion times bigger than our sun? Or that Jupiter likely has diamonds floating in its clouds?

Explore dazzling facts about the vast expanse of space, from glowing stars billions of light-years away to supermassive exploding supernovas to rockets thundering into the unknown. This comprehensive book takes you on a mind-blowing tour of our unbelievable universe and is full of fascinating facts on topics such as space exploration, our solar system and galaxy, and beyond.

Expert astronomer Dean Regas—former host of PBS’s Star Gazers and astronomer of the Cincinnati Observatory—takes you on an incredible tour of facts about each planet in our solar system, dwarf planets, our sun and other stars, exoplanets, comets, asteroids, galaxies, space travel, and so much more. Hundreds of stunning photographs bring the facts to life.

A universe of fun and discovery awaits!

Dean Regas is the Astronomer at Cincinnati Observatory, responsible for science outreach activities, and a national popularizer of astronomy. He is the author of several books including Facts from Space! and was the co-host of the prolific PBS show Star Gazers. An extremely engaging and media-savvy astronomy lecturer, he has served as the Observatory's Outreach Astronomer since 2000 and is one of NASA's Solar System Ambassadors, responsible for sharing its latest science and discoveries. An accomplished educator, Dean is an expert in observational astronomy and was a Contributing Editor to Astronomy magazine, where he won the "Out-of-this-World Award" for astronomy education.