Erin Keane in conversation with Matt Hart discussing and signing Runaway: Notes on the Myths That Made Me 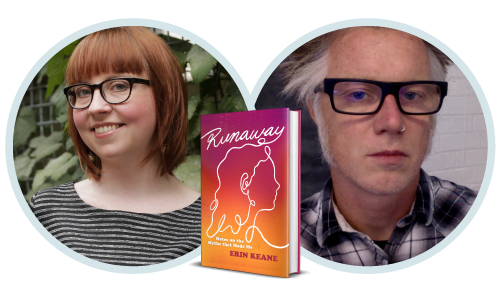 Erin Keane in conversation with Matt Hart discussing and signing Runaway: Notes on the Myths That Made Me

Join us for Erin Keane in conversation with Matt Hart discussing and signing Runaway: Notes on the Myths That Made Me.

In 1970, Erin Keane’s mother ran away from home for the first time. She was thirteen years old. Over the next several years, and under two assumed identities, she hitchhiked her way across America, experiencing freedom, hardship, and tragedy. At fifteen, she met a man in New York City and married him. He was thirty-six.

Through a deft balance of journalistic digging, cultural criticism, and poetic reimagining, Keane pieces together the true story of her mother’s teenage years, questioning almost everything she’s been told about her parents and their relationship. Along the way, she also considers how pop culture has kept similar narratives alive in her. At stake are some of the most profound questions we can ask ourselves: What’s true? What gets remembered? Who gets to tell the stories that make us who we are?

Whether it’s talking about painful family history, #MeToo, Star Wars, true crime forensics, or The Gilmore Girls, Runaway is an unforgettable look at all the different ways the stories we tell—both personal and pop cultural—create us.

“Keane is a brilliant storyteller, who bravely walks us through her beautifully complicated family dynamic, with prose that is razor sharp, informative and powerful enough to make us reexamine ourselves and everything we subscribe to.” —D Watkins, New York Times Bestselling author of Where Tomorrow’s Aren’t Promised and The Cook Up

Erin Keane is a critic, poet, essayist, and journalist. She's the author of three collections of poetry, and editor of The Louisville Anthology (Belt Publishing). Her writing has appeared in many publications and anthologies, and in 2018, she coproduced and cohosted the limited audio series These Miracles Work: A Hold Steady Podcast. She is editor in chief at Salon, where she has worked since 2014, and teaches in the Sena Jeter Naslund-Karen Mann Graduate School of Writing at Spalding University.

Matt Hart is the author of nine books of poems, including most recently Everything Breaking/for Good and The Obliterations. A new book, Familiar, is forthcoming in 2022 from Pickpocket Books. Additionally, his poems, reviews, and essays have appeared or are forthcoming in numerous print and online journals, including Big Bell, Conduit, jubilat, Kenyon Review, Lungfull!, POETRY, and Waxwing, among others. His awards include a Pushcart Prize, a grant from The Shifting Foundation, and fellowships from the Bread Loaf Writers' Conference and the Warren Wilson College MFA Program for Writers. He was a co-founder and the editor-in-chief of Forklift, Ohio: A Journal of Poetry, Cooking & Light Industrial Safety from 1993-2019. Currently, he lives in Cincinnati where he teaches at the Art Academy of Cincinnati and plays in the band NEVERNEW.

Runaway: Notes on the Myths That Made Me (Hardcover)