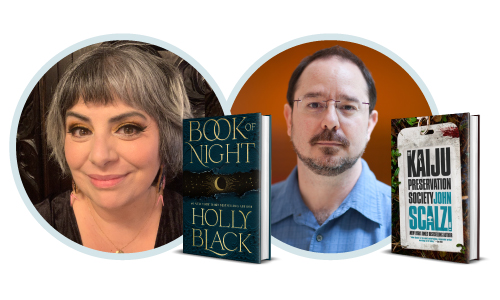 Join us for Holly Black in conversation with John Scalzi discussing and signing Book of Night and The Kaiju Preservation Society. Purchase Book of Night below to attend the event.  Books will be pre-signed by Holly prior to the event, and available for pick up after the event.

#1 New York Times bestselling author Holly Black makes her stunning adult debut with Book of Night, a modern dark fantasy of betrayals, cabals, and a dissolute thief of shadows, in the vein of Neil Gaiman and Erin Morgenstern.

She's spent half her life working for gloamists, magicians who manipulate shadows to peer into locked rooms, strangle people in their beds, or worse. Gloamists guard their secrets greedily, creating an underground economy of grimoires. And to rob their fellow magicians, they need Charlie Hall.

Now, she’s trying to distance herself from past mistakes, but getting out isn’t easy. Bartending at a dive, she’s still entirely too close to the corrupt underbelly of the Berkshires. Not to mention that her sister Posey is desperate for magic, and that Charlie's shadowless (and possibly soulless) boyfriend has been hiding things from her. When a terrible figure from her past returns, Charlie descends back into a maelstrom of murder and lies.

Determined to survive, she’s up against a cast of doppelgängers, mercurial billionaires, gloamists, and the people she loves best in the world — all trying to steal a secret that will allow them control of humanity's shadows...and worse.

Holly Black is the #1 New York Times bestselling and award-winning author of speculative and fantasy novels, short stories, and comics. She has sold over 26 million books worldwide, and her work has been translated into over 30 languages and adapted for film. She currently lives in New England with her husband and son in a house with a secret library. Book of Nightis her adult fiction debut.

The Kaiju Preservation Society is John Scalzi's first standalone adventure since the conclusion of his New York Timesbestselling Interdependency trilogy.

When COVID-19 sweeps through New York City, Jamie Gray is stuck as a dead-end driver for food delivery apps. That is, until Jamie makes a delivery to an old acquaintance, Tom, who works at what he calls “an animal rights organization.” Tom’s team needs a last-minute grunt to handle things on their next field visit. Jamie, eager to do anything, immediately signs on.

What Tom doesn't tell Jamie is that the animals his team cares for are not here on Earth. Not our Earth, at least. In an alternate dimension, massive dinosaur-like creatures named Kaiju roam a warm and human-free world. They're the universe's largest and most dangerous panda and they're in trouble.

It's not just the Kaiju Preservation Society who have found their way to the alternate world. Others have, too. And their carelessness could cause millions back on our Earth to die.

John Scalzi is one of the most popular SF authors of his generation. His debut Old Man's War won him the John W. Campbell Award for Best New Writer. His New York Times bestsellers include The Last Colony, Fuzzy Nation, and Redshirts (which won the 2013 Hugo Award for Best Novel), and 2020's The Last Emperox. Material from his blog, Whatever, has also earned him two other Hugo Awards. Scalzi also serves as critic-at-large for the Los Angeles Times. He lives in Ohio with his wife and daughter.

Book of Night by Holly Black