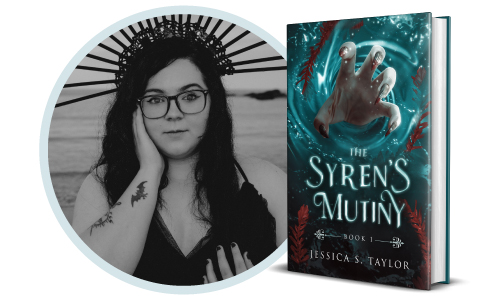 Join us for Jessica S. Taylor signing The Syren’s Mutiny.

"It's frightful bad luck to have a woman aboard."

Brigid knew the superstition, but when her father tried to marry her off, she had no choice but to stowaway on a ship bound for Bhodheas. When she's discovered and discarded, her fate seems sealed...until she's saved by the ocean and its queen.

Transformed into a syren and given new life, Brigid now has the power to seek revenge on those who wronged her.

Caelum has spent his entire life trying to help those who couldn't help themselves. After years suffering the cruelty of his pirate father, saving others from a similar fate was ingrained in him. But when he's unable to save a young girl from being thrown overboard for hiding away, he's devastated.

Until one day, when he's thrown into the water by unforeseen forces, he comes face to face with the past, and maybe, with his future.

But there's a darkness lurking on the seas they both call home. And Caelum and Brigid have no idea just how intertwined their stories really are.

Jessica S. Taylor is a pirate enthusiast and author of the upcoming fantasy novel, The Syren's Mutiny. She graduated from Eastern Kentucky University with two bachelors degrees, in Accounting and Human Resources, because one just wasn't enough. But her passion has always been with writing and reading. Jessica now lives in Maine with her husband, cat, and overflowing collection of books and candles.