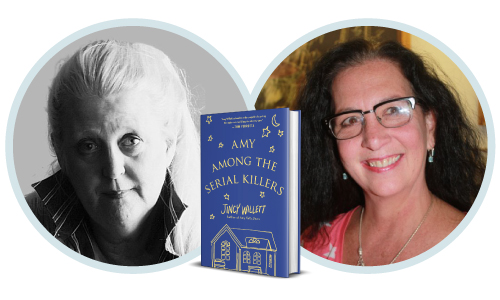 Join us for Jincy Willett in conversation with Rebecca Byrkit discussing Amy Among the Serial Killers. Purchase the book or sign up below to receive a link to this virtual event via email the day before the event.

Jincy Willett's beloved characters return in Amy Among the Serial Killers, a wickedly smart and funny take on the thriller genre by one of our most acclaimed literary humorists.

Carla Karolak is doing just fine. Having escaped the clutches of her controlling mother and founded a successful writing retreat in which participants are confined to windowless cells until they hit their daily word count, she lives a comfortable, if solitary, existence. If only her therapist, Toonie, would stop going on about Carla's nonexistent love life and start addressing her writer’s block, she might be able to make some progress. But then Carla finds Toonie murdered, and suddenly her unfinished memoir is the least of her concerns. Without quite knowing why, she dials an old phone number.

Amy Gallup, retired after decades as a writing instructor, is surprised to hear from her former student Carla out of the blue, three years since they last spoke. She’s even more shocked when she finds out the reason for Carla's call. Suddenly, she finds herself swept up in a murder investigation that soon brings her old writing group back together. But they’ll need all the help they can get, as one murder leads to another, and suspicions of a serial killer mount across San Diego.

Full of Jincy Willett’s trademark dark humor, an unforgettable cast of characters, and two of the most endearingly imperfect protagonists who have ever attempted to solve a murder, Amy Among the Serial Killers shows us what can be gained when we begin to break down our own walls and let others inside…as long as they aren’t murderers.

Jincy Willett is the author of Jenny and the Jaws of Life, Winner of the National Book Award, and The Writing Class, which have been translated and sold internationally. Her stories have been published in Cosmopolitan, McSweeney's Quarterly and other magazines. She frequently reviews for The New York Times Book Review.

Rebecca Byrkit teaches courses in creative nonfiction as a founding faculty member of the Master of Liberal Studies program at Arizona State University. She co-founded of Among Other Things Inc., Tucson’s longest-running literary arts series that brought hundreds of artists and their audiences together. Rebecca is an award-winning author whose work has appeared in the Best American Poetry anthology, Ploughshares, Arizona Highways, Crazyhorse, Black Warrior Review, Best of Exquisite Corpse, the online Rolling Stone, as well as numerous other excellent journals and anthologies. She was an Associated Writers’ Program INTRO award winner in 1992, and received fellowships and honors from the Arizona Commission on the Arts, the Tucson Community Foundation, and New Letters in American Writing.

Amy Among the Serial Killers: A Novel (Amy Gallup #3) (Hardcover)