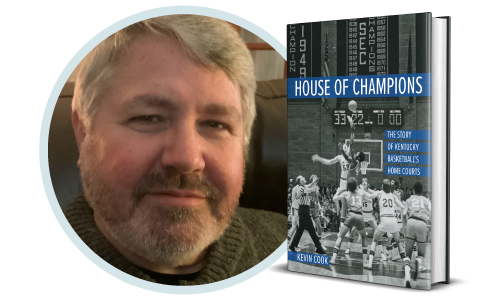 Join us for Kevin Cook in conversation with Coach Dick Parsons discussing and signing House of Champions: The Story of Kentucky Basketball’s Home Courts. Optional RSVP is below but not required to attend the event.

The stories and accounts of Kentucky basketball's players, iconic coaches, and epic games have been told and retold, but lesser known are the stories of the arenas and venues that have been home to the Wildcats—buildings that have witnessed the sights, sounds, and shared spirit of the Big Blue Nation for over a century.

In House of Champions: The Story of Kentucky Basketball's Home Courts, author Kevin Cook combines archival research and numerous interviews with players and coaches to reveal the rich history and colorful details of the structures that have hosted University of Kentucky basketball. A number of fascinating backstories are uncovered, including the excitement of Alumni Gym's opening night in 1925, the problematic acquisition of Black community land for the building of Memorial Coliseum, and the painstaking inscription of nearly ten thousand names of Kentucky's World War II and Korean War heroes to be displayed along the Coliseum's pedestrian ramps. The account concludes with a compelling overview of the development of historic Rupp Arena: its inner workings, the prominent figures involved, and how the initial conversation to build it began over a slice of Jerry's pie in 1968.

This insightful and entertaining history reveals how the impact of sporting facilities extends far beyond game night as they continue to shape and influence the social, economic, and political landscapes of Lexington and central Kentucky.

Kevin Cook has degrees in engineering and American history. His published works include a comprehensive study of the Rochester Royals' NBA franchise in Rochester History, articles in the Jessamine Journal and German Life, and a self-published travel memoir titled Where Am I, Rick Steves? A Misguided Tour of Europe's Back Doors. He has worked as a naval officer, a high school teacher, and a corporate sales representative.

Dick Parsons is a former player and assistant coach to coaches Adolph Rupp and Joe B. Hall