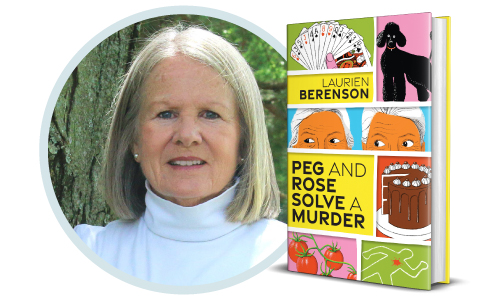 Join us for Laurien Berenson discussing and signing Peg and Rose Solve a Murder.

Murder, She Wrote meets The Odd Couple in award-winning author Laurien Berenson’s brand-new series spun off from her much-loved Melanie Travis Canine Mysteries and featuring Melanie’s elderly aunts—cantankerous Peg and soft-spoken Rose—who’ll put aside their differences to stop a killer… if they don’t throttle each other first!

Rose Donovan looks for the good in everyone. With her sister-in-law, Peg, that sometimes requires a lot of searching. Even a sixty-something former nun like Rose has her limits, and gruff Peg Turnbull sure knows how to push them. But after forty years of bickering, they’re attempting to start over, partnering up to join the local bridge club. Peg and Rose barely have a chance to celebrate their first win before one of the club’s most accomplished players is killed in his home. As the newest members, the sisters-in-law come under scrutiny and decide to start some digging of their own. Bridge is typically seen as a wholesome pastime, yet this group of senior citizens harbors a wealth of vices, including gambling, cheating, and adultery…

By comparison, Peg and Rose’s fractious relationship is starting to feel almost functional. But as their suspect list narrows, they’re unaware that their logic has a dangerous flaw. And they’ll have to hope that their teamwork holds steady when they’re confronted by a killer who’s through with playing games.

Laurien Berenson is an Agatha and Macavity nominee, winner of the Romantic Times Reviewers' Choice Award, and four-time winner of the Maxwell Award, presented by the Dog Writers Association of America. She and her husband live on a farm in Kentucky surrounded by dogs and horses. Readers can visit her website at www.LaurienBerenson.com.