Leo Bradley discussing and signing Three Chords and the Truth 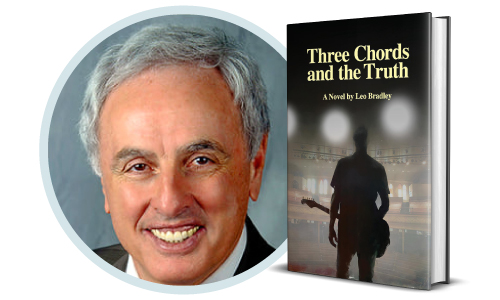 Leo Bradley discussing and signing Three Chords and the Truth

Join us for Leo Bradley discussing and signing Three Chords and the Truth.

The storyline of Three Chords and The Truth involve many interesting character studies. Rose Lassiter, a waitress at Tootsie's Orchid Lounge, whom Lance Hawkins met on his first day in Nashville becomes a life-long friend full of good advice for him during his dark times. Chase Kirkland, hired as a back-up singer for him ended up doing duets with Lance and found success only with Lance and not on his own which he desperately wanted and eventually ended in his tragic death. And finally Grace Taylor, the school teacher who became the love of his life after many starts and stops,

Three Chords and the Truth is Leo Bradley's third novel. His first, The Cotton Factor, is set in Civil War times, and his second, House Built on Sand, is a family saga/historical novel set in the first half of the 20th century America. This time, he has turned his time and talent to creating a unique contemporary novel unveiling the triumphs, tribulations, heartbreak, adulations, loathing and relationships that dominate the lives of country music entertainers.

Bradley has a unique perspective on the country music industry, having pursued his love of music through a life-long hobby of writing, singing, and playing music since the age of ten. He has had over forty of his compositions recorded by Fraternity Records.

As a life-long educator, Dr. Bradley's scholarly achievements include the publication of nine books relating to Leadership and Total Quality Management School law. He has held positions of high school teacher, principal, assistant superintendent, and superintendent in four Ohio Public School Systems before becoming chair and professor emeritus of educational leadership in the College of Professional Sciences at Xavier University in Cincinnati, Ohio which he held for 27 years before retirement.
In 2009 he wrote Underrated Reds, the story of the 1939 -1940 Cincinnati Reds.

Three Chords and the Truth (Paperback)