Lidia Bastianich discussing Lidia’s a Pot, a Pan, and a Bowl: Simple Recipes for Perfect Meals 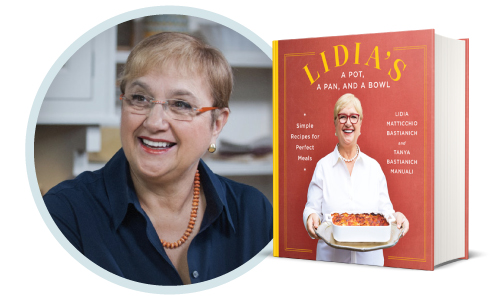 Lidia Bastianich discussing Lidia’s a Pot, a Pan, and a Bowl: Simple Recipes for Perfect Meals

Join us for virtually for Lidia Bastianich discussing Lidia’s a Pot, a Pan, and a Bowl: Simple Recipes for Perfect Meals.  Purchase the book below to receive a link via email the day before the event.

From the beloved TV chef and best-selling author--her favorite recipes for flavorful, no-fuss Italian food that use just one pot or pan (or two ). The companion cookbook to the upcoming public-television series Lidia's Kitchen: Home Cooking.

Lidia Bastianich makes Italian cooking easy for everyone with this new, beautifully designed, easy-to-use cookbook. Here are more than 100 homey, simple-to-prepare recipes that require fewer steps and fewer ingredients (not to mention fewer dirty pots and pans ), without sacrificing any of their flavor.

These are just a few of the delectable dishes that fill this essential book of recipes:

Some of them are old favorites, others are Lidia's new creations, but every one represents Italian food at its most essential--guaranteed to transport home cooks to Italy with a minimum of fuss and muss.

Lidia Matticchio Bastianich is the author of fifteen previous cookbooks and the Emmy Award-winning host of public television's Lidia's Kitchen, which also airs internationally. She is also a judge on Junior MasterChef Italy and Italy's highly rated daily program La Prova del Cuoco. Lidia owns Felidia, Becco, and several other restaurants, and is a partner in the acclaimed Eataly. Tanya Bastianich Manuali is integrally involved in the production of Lidia's Public Television series as an owner and executive producer of Tavola Productions, and is active daily in the family restaurant business. She oversees the production and expansion of LIDIA'S food line alongside her husband, Corrado, and has coauthored several cookbooks with her mother, and one with her brother, Joe.

Lidia's a Pot, a Pan, and a Bowl: Simple Recipes for Perfect Meals: A Cookbook (Hardcover)