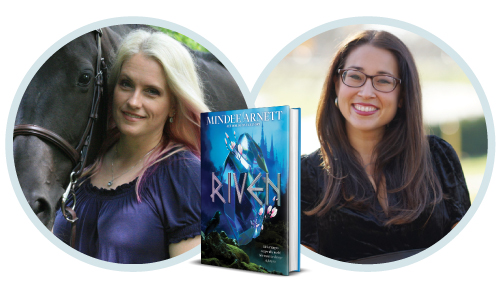 Join us for Mindee Arnett in conversation with Kristen Simmons discussing and signing Riven. Optional RSVP is below but not required to attend the event.

From acclaimed fantasy author Mindee Arnett comes an epic, adventurous story of a young mercenary magic-user trying to escape the oppressive island of Riven—and a young noblewoman trying to change it forever.

Mars Darksvane wants out. Out from under the thumb of Una, the crime boss who pulled him off the streets as a child and trained him as an assassin; out from the island country of Riven, where magic, in the form of a dangerous material called Ice, allows the rich to live in luxury and keeps the poor in thrall.

Mars is a secret adept—a person born with the ability to channel the magic that flows beneath Riven—and while his power gives him abilities useful to an assassin, it also makes him a target. And when his last mission ends in tragedy, Mars finally decides it's time to escape to the mainland. No magic, no history, a new life on his own.

But Una has other ideas. If Mars wants his freedom, he's going to have to perform a final job: protecting Fura Torvald—the heiress of the rich and powerful Torvald kith, and the daughter of the last man Mars was sent to kill—and stealing from her a mysterious object known only as the Primer.

Mars has no interest in Fura or whatever the Primer is, nor in Riven's corrupt and oppressive politics; he just wants to do his job and get out. But as Mars comes to know more about Fura, the Primer, and the true nature of the power in Riven, he realizes that he will soon have to take a side in a fight he has avoided his entire life.

Which side, however, he does not yet know.

Mindee Arnett is the acclaimed author of Onyx & Ivory and its sequel, Shadow & Flame, as well as Avalon and its sequel, Polaris. She lives on a horse farm in Ohio with her husband, two kids, a couple of dogs, and an inappropriate number of cats.

Kristen Simmons is the critically acclaimed author of the Article 5 series, The Glass Arrow, Metaltown, Pacifica, and The Deceivers. She has worked with survivors of abuse and trauma as a mental health therapist, taught Jazzercise in five states, and is forever in search of the next best cupcake. Currently she lives in Cincinnati, OH, with her husband, where she spends her days supporting the caffeine industry and chasing her rambunctious son.