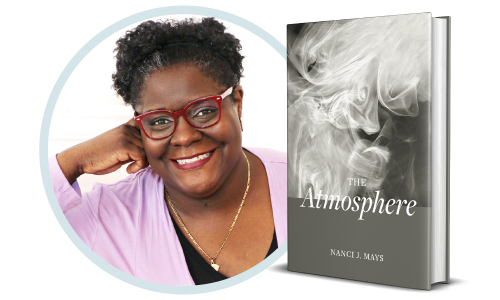 Join us for Nanci J. Mays discussing and signing The Atmosphere. Optional RSVP is below but not required to attend the event.

The Atmosphere is a poetic journey through the adulthood of Nanci J. Mays. It is an honest, intimate, raw, and raunchy, sometimes vulgar timeline of Mays’ crazy upside-down entanglements with love, life, and the pursuit of real shit. Broken into the parts of a play, the collection follows the highs and lows of being a Black woman from the hood trying to find love in the world, in others, but ultimately finding it in herself.

Nanci J. Mays was born in Cincinnati, Ohio, and grew up in the historic Over the Rhine neighborhood. She attended the Academy of World Languages and Withrow High School, (both Cincinnati Public Schools), where she studied Russian for 12 years. She attended the University of Cincinnati and received a B.A. in English. She has been in education since 2006. In 2012 she received her M.A. in Christian Studies from Grand Canyon University.