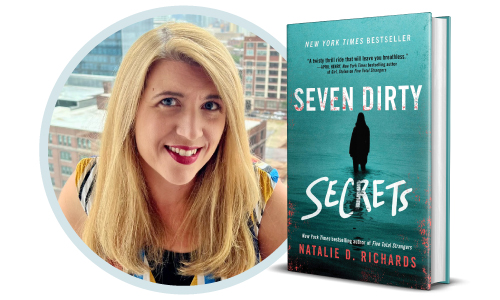 Join us for Natalie D. Richards discussing and signing Seven Dirty Secrets. Optional RSVP is below, but not required to attend the event.

From the New York Times bestselling author of Five Total Strangers and "master of suspense" (BCCB), Natalie D. Richards, comes a pulse-pounding YA thriller about a girl who goes on a mysterious scavenger hunt, only to discover that someone knows her worst secret...and is out for blood.

One caused the fall. One did nothing. One saw it all.

One didn't care. One used their head. One played the hero.

One was left for dead.

On her eighteenth birthday, Cleo receives a mysterious invitation to a scavenger hunt. She's sure her best friend Hope or her brother Connor is behind it, but no one confesses. And as Cleo and Hope embark on the hunt, the seemingly random locations and clues begin to feel familiar.

In fact, all of the clues seem to be about Cleo's dead boyfriend, Declan, who drowned on a group rafting trip exactly a year ago. A bracelet she bought him. A song he loved. A photo of the rafting group, taken just before Declan drowned. And then the phone calls start, Declan's voice taunting Cleo with a cryptic question: You ready?

As the clock on the scavenger hunt ticks down, it becomes clear that someone knows what really happened to Declan. And that person will stop at nothing to make sure Cleo and her friends pay. Can they solve the hunt before someone else winds up dead?

Natalie D. Richards is the author of two New York Times Bestsellers, Five Total Strangers (2020) and Seven Dirty Secrets (2021), as well as six additional novels. Natalie writes “page-turning thrillers'' (School Library Journal) for a Young Adult audience. Her first middle-grade book, through Penguin Random House imprint Delacourt, is called 15 Secrets to Survival and is due out in 2023. Four Found Dead will be Natalie’s ninth YA thriller from Sourcebooks and is expected to be a bone chilling addition to her psychologically twisted work.

Natalie won her very first writing contest when she was in the second grade with a short story about Barbara Frances Bizzlefishes (who would not dare do the dishes). These days she writes about some awesome girls, broody boys, and all things that are creepy and dark. She spent many years applying her writing abilities to amazingly boring business documents. Fortunately, she realized that she is much better at making things up and has written for teens ever since.

When she isn’t shopping a manuscript or writing, she can most likely be found wading through the huge stacks of dog-eared paperback books that have taken over her bedroom.

As a writer, she tends to write by the seat of her pants without much of a clue as to where she is going with each scene, often with the entire book as a whole. Natalie finds this helps her maintain an authentic edge of suspense in all her work because she honestly has no idea just how or even if her characters will get out of whichever mess she has written them into.

Natalie currently lives in Ohio with her three children and (very) large dog.