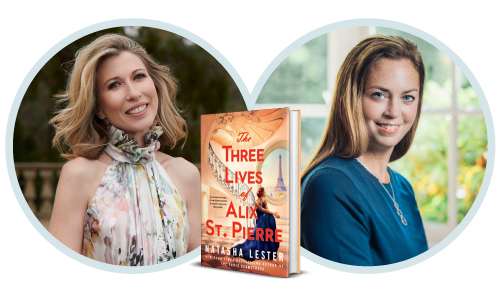 Join us for Natasha Lester in conversation with Marie Benedict, author of The Mitford Affair, discussing The Three Lives of Alix St. Pierre. RSVP below to receive a link to attend this virtual event.

Additionally, if you pre-order the book using the link below, you will receive a signed bookplate and a set of mini notebooks featuring Natasha’s artwork (while supplies last).

Alix St. Pierre. An unforgettable name for an unforgettable woman. She grew up surrounded by Hollywood glamor, but, as an orphan, never truly felt part of that world. In 1943, with WWII raging and men headed overseas to fight, she lands a publicity job to recruit women into the workforce. Her skills—persuasion, daring, quick-witted under pressure—catch the attention of the U.S. government and she finds herself with an even bigger assignment: sent to Switzerland as a spy. Soon Alix is on the precipice of something big, very big. But how far can she trust her German informant…?

After an Allied victory that didn’t come nearly soon enough, Alix moves to Paris, ready to immerse herself in a new position as director of publicity for the yet-to-be-launched House of Dior. In the glamorous halls of the French fashion house, she can nearly forget everything she lost and the dangerous secret she carries. But when a figure from the war reappears and threatens to destroy her future, Alix realizes that only she can right the wrongs of the past …and finally find justice.

Natasha Lester is the New York Times bestselling author of The Paris Seamstress, The Paris Orphan and The Riviera House, and a former marketing executive for L’Oréal. Her novels have been translated into many different languages and are published all around the world. When she’s not writing, she loves collecting vintage fashion (Dior is a favorite!), practicing the art of fashion illustration, learning about fashion history—and traveling to Paris. Natasha lives with her husband and three children in Perth, Western Australia.

Marie Benedict is a New York Times and USA Today bestselling author of eight works of historical fiction, including The Only Woman in the Room, The Mystery of Mrs. Christie, and, with Victoria Christopher Murray, the Good Morning America Book Club pick The Personal Librarian. A lawyer with more than ten years’ experience at the country’s premiere law firms, she found her calling in unearthing the hidden historical stories of women. Her mission is to excavate from the past the most important, complex and fascinating women of history and bring them into the light of present-day where we can finally perceive the breadth of their contributions as well as the insights they bring to modern day issues. Her new book, The Mitford Affair, out January 17 and available now for pre-order, explores the role that history’s most notorious sisters—the glamorous, brilliant, and eccentric Mitfords—played in the rise of World War II, both for and against the Nazis.