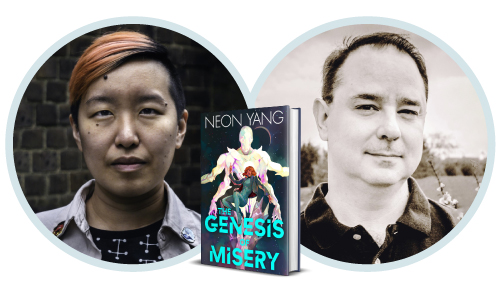 Join us for Neon Yang in conversation with John Scalzi discussing and signing The Genesis of Misery. Optional RSVP is below, but RSVP is not required to attend the event.

Per the author's request, this is a masked event.

"Neon Yang conjures a glittering, dangerous world where politics and religion clash in gemstone castles that float among the stars. Misery will tantalize, frustrate, and seduce you. Good luck getting them out of your mind." — Annalee Newitz, author of Autonomous

"Transmute the saintly Joan of Arc into a foul-mouthed and combative protagonist, decant them/her into a weird and wild far future, and strap in for a wrecking ball of a ride." — Kate Elliott, author of Unconquerable Sun

The author of the acclaimed fantasy novellas of The Tensorate Series, Neon Yang introduces an immersive, electrifying space-fantasy for their debut full-length novel. The Genesis of Misery twists together magical powers, high-tech space battles, religious saints, and political machinations in a truly fantastical tale starring a queer and diverse array of pilots, princesses, and prophetic heirs.

This is the story Misery Nomaki (she/they), a nobody from a nowhere mining planet. Misery has abilities they shouldn’t have: they can bend the will of stone, a dangerous magic that only "saints" are said to have. These abilities lead Misery to the center of the Empire, where rumors spread that Misery is the next Messiah, and where those in power seek to use Misery to win a terrible war.

Amid a nest of vipers, Misery grows close to a rebellious royal, Lady Alodia Lightning, and decides to embrace the legacy the prophecies speak of. True or false, for better or worse, Misery Nomaki will be the Ninth Messiah.

Neon Yang (they/them) is a queer non-binary author based in Singapore. They have been nominated for the Hugo, Nebula, World Fantasy, Lambda Literary, Ignyte, and Locus Awards, and their work has been an Otherwise Award Honoree. They are the author of the Tensorate series of novellas from Tor.com Publishing. In previous incarnations, Neon was a molecular biologist, a science communicator, a writer for animation, games and comic studios, and a journalist for one of Singapore's major papers.

John Scalzi is one of the most popular SF authors to emerge in the last decade. His debut, Old Man's War, won him the John W. Campbell Award for Best New Writer. His New York Times bestsellers include The Last Colony, Fuzzy Nation, Redshirts (which won the 2013 Hugo Award for Best Novel), and 2020's The Last Emperox. Material from his blog, Whatever, has earned him two other Hugo Awards. He lives in Ohio with his wife and daughter.