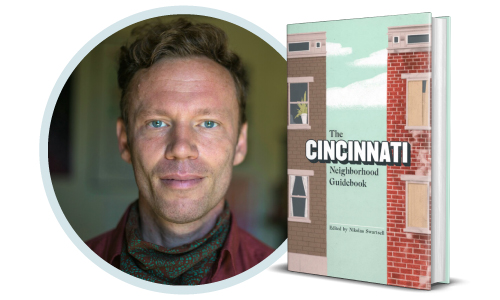 Join us for Nick Swartsell discussing and signing The Cincinnati Neighborhood Guidebook. Nick will be joined by Carrie Rhodus and Katrina Eresman.

Cincinnati, Ohio, is a complex mix of many different things: its present and its past, its transitions and its legacies; what defines it and distinguishes it; what makes people love it and what makes some eventually leave it. This collection, written by both lifelong Cincinnatians and recent transplants, offers a sampling of life there today--the tensions, debates, the life-and-death battles, and, not least of all, the joys that make this city so alive. It's a genuinely felt collection that offers a unique perspective on an evolving and energized city, a homegrown portrait showcasing the voices of people who know something about the way life feels – and why it feels that way – in their communities. It's about all the ways Cincinnati's differences are the very things that make the city so alive.

Edited by Nick Swartsell and with short essays by Gail Finke, Pauletta Hansel, Dani McClain, Ronny Salerno, Katie Vogel, and many others, this collection offers an intimate tour of the city's seven hills, its fifty-two neighborhoods, and its countless stories. Natives of Cincinnati will recognize both their streets and their histories, and readers from outside the city will get an unfiltered look at the locale known as "The Queen City."

Nick Swartsell is a reporter and producer for 91.7 WVXU, Cincinnati's NPR affiliate. His written work has appeared in The New York Times, the Texas Tribune, The Dallas Morning News, Vice and other publications. He recently edited Belt Publishing's The Cincinnati Neighborhood Guidebook.