Penny McGinnis discussing and signing Home Where She Belongs 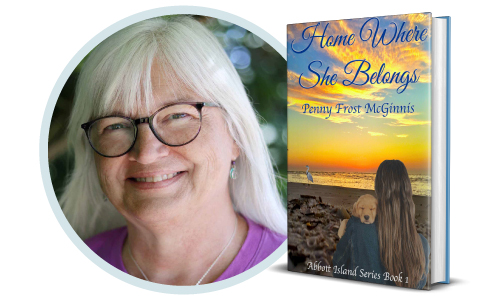 Penny McGinnis discussing and signing Home Where She Belongs

Join us for Penny McGinnis discussing and signing Home Where She Belongs.

Tired of being a pawn for her father and an emotional punching bag for her ex-boyfriend, Sadie Stewart runs away. She leaves behind a lucrative job, at her father's financial company, and narcissistic, abusive ex-boyfriend, Bryce Shaw. Her heart longs for a peaceful, simple life on beloved Abbott Island in Lake Erie, Ohio where she spent magical summers with grandparents she adored.

On the island, Sadie takes over her grandparents' small island home and her gram's rental cottages. With a fresh start on the island, she tries to push the past behind and dig in to make the rental business thrive. As Sadie and her dog, settle into her new home, her thoughts wander to Joel Grayson, her teen crush. As soon as he crosses her mind, she dashes the thought away. Not ready to share her heart with anyone, she pushes herself to finish her tasks.

Joel Grayson left the island long enough to train at the Police Academy. The folks in the community trust him, even with his failures. Before Sadie's grandpa died, Joel had promised him he'd look after their cottages, with a secret hope Sadie might return. When he's on patrol and finds a woman on his friend's property, he bristles until he realizes his dream girl has come home.

Sadie recognizes Joel and immediately guards her heart. Her experience with Bryce left her untrusting and hesitant. Even handsome and kind Joel won't tempt her to open her heart.

When someone is set on sabotaging Sadie's future, she seeks Joel's help. As they are drawn together, Joel wants to protect Sadie as a police officer and a friend. Sadie begins to trust Joel and allows the wall around her heart to crumble, just a little. As Joel tries to find the person behind the menacing, Sadie fights to build her rental business and latch on to the peace she longs for.

Even as Joel and Sadie grow closer, a dark cloud hangs over them. Ugly graffiti, a fire, and threats cause Sadie grief. She wants to believe in God, the way her grandparents did and longs for the peace that passes understanding, but her heart hesitates to trust anyone.

Joel needs to place his past behind him and allow God to work in his heart. In his attempts to protect Sadie, he falls for her all over again, even though she keeps her distance.

Will Joel and Sadie overcome their fear and lack of trust? When they discover who is sabotaging Sadie's future, can they stop them? Will two broken people find their path to love?

Home Where She Belongs is a romance with a dash of mystery and the promise of hope, as Joel and Sadie discover what it means to trust in the God who loves them.

If Penny Frost McGinnis could live in a lighthouse or on an island, she would. Instead, she and her husband are content to live in southwest Ohio and visit Lake Erie every chance they get. She adores her family and dogs, indulges in dark chocolate, enjoys fiber arts, and grows flowers and herbs in her tiny garden. She pens romance novels with a dash of mystery and the promise of hope. Her life's goal is to encourage and uplift through the written word.

Home Where She Belongs (Paperback)