Peter Bronson discussing and signing Not in Our Town: The Queen City vs. The King of Smut 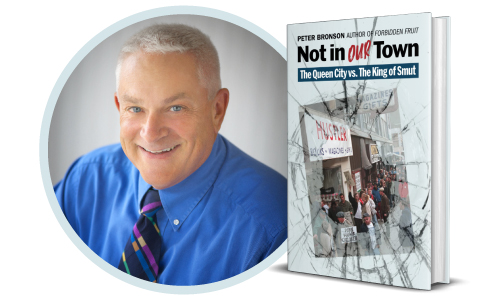 Peter Bronson discussing and signing Not in Our Town: The Queen City vs. The King of Smut

Join us for Peter Bronson discussing and signing Not in Our Town: The Queen City vs. The King of Smut. Optional RSVP is below but not required to attend the event.

Not in Our Town is the amazing, untold story of the Mob in the Heartland and the gritty, dangerous battle to keep Cincinnati clean and safe. Career newsman and vivid storyteller Peter Bronson has done extensive research and interviews to reveal what you didn’t know about…

Peter Bronson has been a newsman in Michigan, Arizona and Ohio. He was an award-winning editor and columnist at the Tucson Citizen and the Cincinnati Enquirer. He grew up in Michigan and graduated from Michigan State University, working as a busboy, bartender, car valet, pizza chef, construction laborer and snow-plow driver. He has been a host and producer on weekly TV news shows and served as a volunteer and board member for nonprofits that aid neglected and abused children. He fell in love with books at age 7 when his single mother could not afford to fix a broken TV and dragged him to the library. After his career in newspapers, he became a publisher, editor, author and ghostwriter with his company Chilidog Press LLC, which has published dozens of titles. When not writing, editing, or reading books, he leads Bible groups for his church, plays golf and works on classic cars. He lives with his wife in Milford, Ohio, a suburb of Cincinnati.