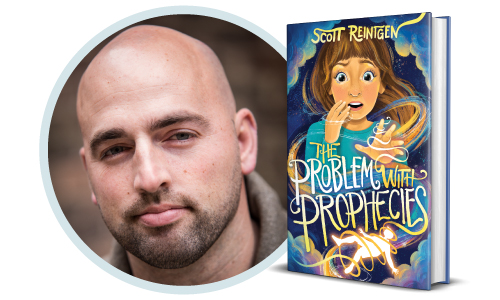 Saturday, May 14 at 2pm ET NOTE: This event has been postponed. We hope to reschedule shortly.

Join us for Scott Reintgen discussing The Problem with Prophecies. Purchase the book or sign up below to receive a link to the virtual event via email the day before the event.

A young seer’s first prophetic vision upends her life and sets her off on a desperate quest to change fate in this contemporary fantasy middle grade novel.

Most people inherit eye colors or heirlooms, but for Celia Cleary, the gift of prophecy has been passed down in her family for generations. And on the 4,444th day of her life, Celia will have her first vision. But nothing could have prepared her for what she sees—the quiet boy down the street, Jeffrey Johnson, is about to die.

Determined to save him despite her grandmother’s warnings against it, Celia alters events to stop her vision from playing out. But for each prophecy she avoids, another one takes its place, putting Jeffrey in constant danger. Fate has made its choice, and it’s not giving up the hunt.

Focusing on homework or friends isn’t easy when you’re going head-to-head with death, and keeping Jeffrey Johnson alive is throwing Celia’s seventh grade year into chaos. It doesn’t help that she’s getting to know Jeffrey more and more with each new rescue attempt. It really doesn’t help when she realizes she kind of likes him.

Will Celia’s gifts be enough to thwart fate? Or are some things in life inevitable?

Scott Reintgen is a former public school teacher and still spends summers teaching middle schoolers dark fiction and fantasy at Duke Young Writers’ Camp. The birth of his children has convinced him that magic is actually real. He lives in North Carolina, surviving mostly on cookie dough and the love of his wife, Katie. Scott is the author of the Nyxia Triad and Ashlords series for young adults, as well as the Talespinners series and The Problem with Prophecies for middle graders.

The Problem with Prophecies (The Celia Cleary Series #1) (Hardcover)