Randall Munroe in conversation with Travis McElroy discussing and signing What If? 2: Additional Serious Scientific Answers to Absurd Hypothetical Questions 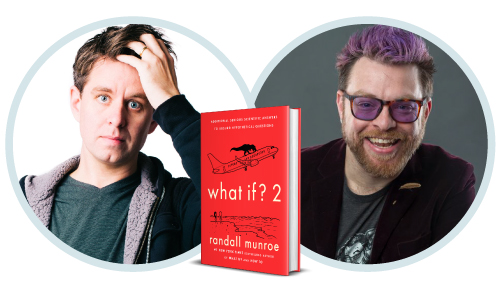 Randall Munroe in conversation with Travis McElroy discussing and signing What If? 2: Additional Serious Scientific Answers to Absurd Hypothetical Questions

Join us for Randall Munroe in conversation with Travis McElroy discussing and signing What If? 2: Additional Serious Scientific Answers to Absurd Hypothetical Questions. Purchase the book below to attend the event. Books will be available for pick up at the event.

The #1 New York Times bestselling author of What If? and How To answers more of the weirdest questions you never thought to ask.

The millions of people around the world who read and loved What If? still have questions, and those questions are getting stranger. Thank goodness xkcd creator Randall Munroe is here to help. Planning to ride a fire pole from the Moon back to Earth? The hardest part is sticking the landing. Hoping to cool the atmosphere by opening everyone’s freezer door at the same time? Maybe it’s time for a brief introduction to thermodynamics. Want to know what would happen if you rode a helicopter blade, built a billion-story building, made a lava lamp out of lava, or jumped on a geyser as it erupted? Okay, if you insist.

Before you go on a cosmic road trip, feed the residents of New York City to a T. rex, or fill every church with bananas, be sure to consult this practical guide for impractical ideas. Unfazed by absurdity, Munroe consults the latest research on everything from swing-set physics to airliner catapult–design to answer his readers’ questions, clearly and concisely, with illuminating and occasionally terrifying illustrations. As he consistently demonstrates, you can learn a lot from examining how the world might work in very specific extreme circumstances.

Randall Munroe is the author of the number one New York Times bestsellers How To, What If?, and Thing Explainer; the science question-and-answer blog What If?; and the popular web comic xkcd. A former NASA roboticist, he left the agency in 2006 to draw comics on the internet full time. He lives in Massachusetts.

Travis McElroy was born in West Virginia and attended the University of Oklahoma as a National Merit Scholar. He graduated from OU with a BFA in Acting and then proceeded to have no idea what he was going to do with his life. At the age of 25, he began his podcast, My Brother My Brother and Me (MBMBaM) with his real-life brothers, Justin and Griffin, began working as an actor/technical director at the Cincinnati Shakespeare Company, and met his wife. Altogether, a pretty good year. He worked at Cincy Shakes with notable roles like Laertes, Juliet’s Nurse, and Lucius Andronicus as well as winning an award for set design. After Cincy Shakes, Travis became a full time Podcaster adding new shows like Trends Like These, Shmanners and most notably, The Adventure Zone. MBMBaM was later adapted into a live action television show through NBCUniversal’s comedy streaming channel, Seeso. The MBMBaM show also premiered as the #1 television show for sale on iTunes. The McElroys also adapted The Adventure Zone into a graphic novel series via First Second Books with book one (2018) book 2 (2019) and book 3 (2020) reaching #1 on the New York Times Paperback Fiction Best Sellers list. Travis’s pop culture notoriety has earned him a role in the Trolls World Tourmovie alongside Justin Timberlake, Anna Kendrick and Jamie Dornan. He continues to record podcasts and regularly takes the shows on tour across the US & UK.

What If? 2: Additional Serious Scientific Answers to Absurd Hypothetical Questions by Randall Munroe (for pick-up at the event)