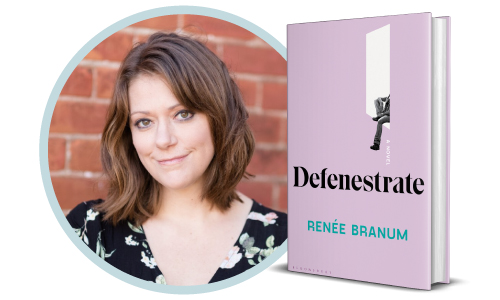 An exuberant, wildly inventive debut about a young woman fascinated by her ancestors' legendary "falling curse" and trying to keep her own family from falling apart.

Marta and her twin brother Nick have always been haunted and fascinated by an ancestral legend that holds that members of their family are doomed to various types of falls. And when their own family collapses in the wake of a revelation and a resulting devastating fight with their Catholic mother, the twins move to Prague, the city in which their “falling curse” began. There, Marta and Nick try to forge a new life for themselves. But their ties to the past and each other prove difficult to disentangle, and when they ultimately return to their midwestern home and Nick falls from a balcony himself, Marta is forced to confront the truths they've hidden from each other and themselves.

Ingeniously and unforgettably narrated by Marta as she reflects on all the ways there are to fall--from defenestration in nineteenth century Prague to the pratfalls of her childhood idol Buster Keaton, from falling in love to falling midflight from an airplane--Defenestrate is a deeply original, gorgeous novel about the power of stories and the strange, malleable bonds that hold families together.

Renée Branum has an MFA in Creative Nonfiction from the University of Montana and an MFA in Fiction from the Iowa Writers' Workshop where she was a Truman Capote Fellow. Her work has appeared in The Georgia Review, Narrative Magazine, The Gettysburg Review, Brevity, Alaska Quarterly Review, and Best American Nonrequired Reading, among others. She was a recipient of a National Endowment for the Arts Prose Fellowship in 2020. She currently lives in Cincinnati, where she is pursuing a PhD in Fiction.