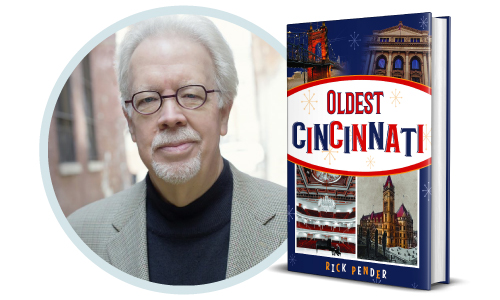 Join us for Rick Pender discussing and signing Oldest Cincinnati.

Late in the 18th-century, people began to head west in America in search of new frontiers and new lives. Many of them, including immigrants, found their way down the Ohio River to Cincinnati, Ohio, the “Queen City of the West.” In Oldest Cincinnati, follow their journey and learn the story of the city as you’ve never heard it before.

Read about a ferry that helped early settlers cross the Ohio River to Augusta, Kentucky, began in 1798 and that’s still in business today. Likewise, a stagecoach inn that began providing shelter for early travelers opened in Lebanon, Ohio, in 1803 continues welcoming guests to this day. As one of the first settlements in the Northwest Territory, called “Losantiville” before it was dubbed Cincinnati, there are still many “firsts” and “oldests” to be found locally. The first museum—focused on natural history and science—was launched in 1818. It’s now located in Cincinnati’s oldest train station. In 1866 the oldest bridge across the Ohio River connected downtown Cincinnati to Covington, Kentucky. The oldest art museum west of the Allegheny Mountains opened in 1881.

While the character of Cincinnati dramatically changed in the mid-19th century as German immigrants came in waves, the city would continue to boom culturally. They brewed beer, of course, but they also loved music, launching the oldest choral music festival in the Western Hemisphere.

Local historian and author Rick Pender goes to great lengths to research and pay homage to more than two centuries of Cincinnati’s oldests, firsts, and finests.

A Cincinnati journalist, author, radio interviewer, step-on tour guide, and urban resident, Rick Pender has covered and promoted events and arts for nearly four decades. You can read his columns, features, and reviews in the newsweekly Cincinnati CityBeat and hear his interviews on WVXU-FM.