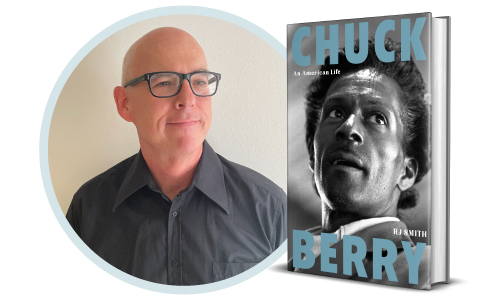 Join us for RJ Smith discussing and signing Chuck Berry: An American Life. Optional RSVP is below but not required to attend the event.

The definitive biography of Chuck Berry, legendary performer and inventor of rock and roll

Best known as the groundbreaking artist behind classics like “Johnny B. Goode,” “Maybellene,” “You Never Can Tell” and “Roll Over Beethoven,” Chuck Berry was a man of wild contradictions, whose motives and motivations were often shrouded in mystery. After all, how did a teenage delinquent come to write so many songs that transformed American culture? And, once he achieved fame and recognition, why did he put his career in danger with a lifetime’s worth of reckless personal behavior? Throughout his life, Berry refused to shed light on either the mastery or the missteps, leaving the complexity that encapsulated his life and underscored his music largely unexplored—until now.

In Chuck Berry, biographer RJ Smith crafts a comprehensive portrait of one of the great American entertainers, guitarists, and lyricists of the 20th century, bringing Chuck Berry to life in vivid detail. Based on interviews, archival research, legal documents, and a deep understanding of Berry’s St. Louis (his birthplace, and the place where he died in March 2017), Smith sheds new light on a man few have ever really understood. By placing his life within the context of the American culture he made and eventually withdrew from, we understand how Berry became such a groundbreaking figure in music, erasing racial boundaries, crafting subtle political commentary, and paying a great price for his success. While celebrating his accomplishments, the book also does not shy away from troubling aspects of his public and private life, asking profound questions about how and why we separate the art from the artist.

Berry declined to call himself an artist, shrugging that he was good at what he did. But the man's achievement was the rarest kind, the kind that had social and political resonance, the kind that made America want to get up and dance. At long last, Chuck Berry brings the man and the music together.

RJ Smith has been a senior editor at Los Angeles Magazine, a contributor to Details, a columnist for The Village Voice, a staff writer for Spin, and has written for GQ, New York Times Magazine, Elle, and Men's Vogue. His book The One: The Life and Music of James Brown was among the New York Times' "100 Notable Books of 2012." Smith lives in Cincinnati.