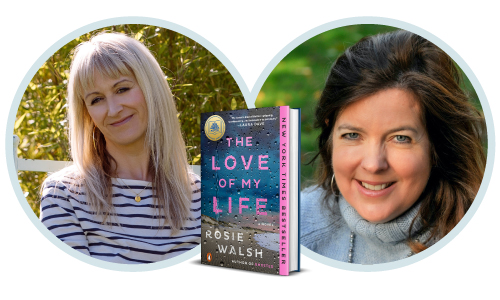 Join us for Rosie Walsh in conversation with Clare Pooley discussing The Love of My Life. RSVP below to receive a link to attend this virtual event.

The Love of My Life follows the story of a couple, Emma and Leo. Emma loves her husband and their daughter Ruby: she’d do anything for them. The life they’ve built together in her family’s old house may be cramped, but it’s perfect for the three of them and their beloved dog, John Keats. But Emma isn’t who she says she is—almost everything she’s told them about herself is a lie. And Leo might never have known if it weren’t for his job as an obituary writer. When Emma, a well-known marine biologist, suffers a serious illness, Leo copes by doing what he knows best — researching and writing about his wife’s life.

As he starts to unravel the truth, discovering that the woman he loves doesn’t really exist, he falls into a devastating spiral of uncertainty and distrust. When the darkest moments of Emma’s past finally come to light, she must somehow prove to Leo that she really is the woman he always thought she was. But first, she must tell him about the other love of her life.

Exploring elements of grief, betrayal, and deception, The Love of My Life is an all-consuming read that marks the return of an extraordinary writer whose star will only continue to rise.

Rosie Walsh lived and traveled all over the world, working as a documentary producer and writer. Ghosted, her American debut, was a New York Times bestseller and has sold more than one million copies worldwide. The Love of My Life is her second novel. She lives in Devon, UK, with her partner and two children.

Clare Pooley graduated from Cambridge University, and then spent twenty years in the heady world of advertising before becoming a full-time writer. Her debut novel, The Authenticity Project, was a New York Times bestseller, and has been translated into twenty-nine languages. Pooley lives in Fulham, London, with her husband, three children, and two border terriers. Iona Iverson’s Rules for Commuting is her second novel.