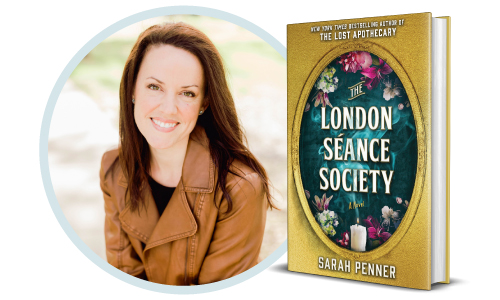 Join us for Sarah Penner discussing and signing The London Séance Society. Purchase the book below to attend the event. Books will be available for pick-up at the event.

From the author of the sensational bestseller The Lost Apothecary comes a spellbinding tale about truth, illusion and the grave risks women will take to avenge the ones they love.

May mercy be upon the man who finds himself the enemy of a vengeful medium...

1873. At an abandoned chateau on the outskirts of Paris, a dark séance is about to take place, led by acclaimed spiritualist Vaudeline D'Allaire. Known worldwide for her talent in conjuring the spirits of murder victims to ascertain the identities of the people who killed them, she is highly sought after by widows and investigators alike.

Lenna Wickes has come to Paris to find answers about her sister's death, but to do so, she must embrace the unknown and overcome her own logic-driven bias against the occult. When Vaudeline is beckoned to England to solve a high-profile murder, Lenna accompanies her as an understudy. But as the women team up with the powerful men of London's exclusive Séance Society to solve the mystery, they begin to suspect that they are not merely out to solve a crime, but perhaps entangled in one themselves...

Written with alluring suspense and sultry prose and featuring strong, boundary-breaking female characters, The London Séance Society is an “explosive, immersive, time-bomb of a novel” (Laurie Lico Albanese, award-winning author of Hester and Stolen Beauty) that explores the blurred lines between truth and illusion and reveals the grave risks women will take to avenge the ones they love. After all, “Vengeance is never sweeter than in Sarah Penner’s hands.”

Sarah Penner is the New York Times and internationally bestselling author of The Lost Apothecary, which has been translated into 40 languages worldwide. Sarah and her husband live in Florida.