Scarlett St. Clair in conversation with Gwenda Bond discussing and signing Queen of Myth and Monsters 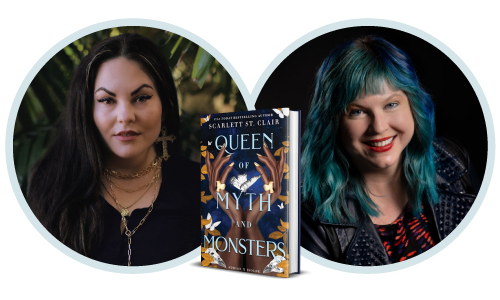 Scarlett St. Clair in conversation with Gwenda Bond discussing and signing Queen of Myth and Monsters

Join us for Scarlett St. Clair in conversation with Gwenda Bond discussing and signing Queen of Myth and Monsters. Optional RSVP is below but not required to attend the event.

The next book in the epic fantasy series by USA Today bestselling author Scarlett St. Clair.

Isolde, newly coronated queen, has finally found a king worthy of her in the vampire Adrian. But their love for each other has cost Isolde her father and her homeland. With two opposing goddesses playing mortals and vampires like chess pieces against one another, Isolde is uncertain who her allies are in the vampire stronghold of Revekka.

Now, as politics in the Red Palace grow more underhanded and a deadly blood mist threatens all of Cordova, Isolde must trust in the bond she's formed with Adrian, even as she learns troubling information about his complicated past.

Scarlett St. Clair is the bestselling author of the Hades X Persephone Saga, the Hades Saga, King Of Battle And Blood, and When Stars Come Out. She has a Master's degree in Library Science and Information Studies and a Bachelors in English Writing. She is also a proud citizen of the Muscogee Nation. She is obsessed with Greek Mythology, murder mysteries, and the afterlife.

Gwenda Bond is the New York Times bestselling author of many novels, including the first official Stranger Things novel, Suspicious Minds. She also clearly escaped from a classic screwball romantic comedy. Not Your Average Hot Guy and The Date from Hell are her first romantic comedies, and will be followed in 2023 by Mr. & Mrs. Witch. Her nonfiction writing has appeared in Publishers Weekly, Locus Magazine, Salon, the Los Angeles Times, and many other publications. She co-founded the charitable efforts Creators 4 Comics and the Lexington Writer’s Room. She lives in a hundred-year-old house in Lexington, Kentucky, with her husband, author Christopher Rowe, and a veritable zoo of adorable doggos and queenly cats.