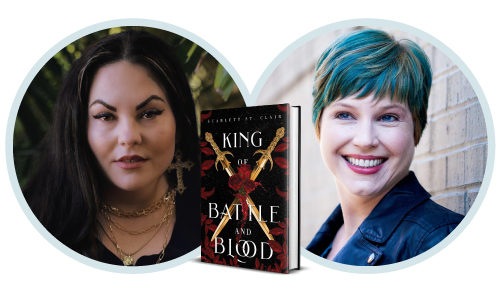 Join us for Scarlett St. Clair in conversation with Gwenda Bond discussing King of Battle and Blood.  Purchase the book below or RSVP to receive a link via email the day before the event.

King of Battle and Blood is the first book in a new dark fantasy series by bestselling author Scarlett St. Clair.

Their union is his revenge. Isolde de Lara marries the powerful vampire kind, Adrian Aleksandr Vasiliev, to protect the people of her small kingdom. Adrian is set on dominiation, moving to overtake the Nine Houses of Cordova. Forces push Isolde toward an assassination attempt, but she is shocked to discover that this charismatic male may be an attentive leader. He’s certainly a skilled and attentive lover.

The attraction between Isolde and Adrian crackles, making an assassination attempt almost impossible. When she is thwarted, Adrian makes a dire promise: try to kill him again, and he’ll turn her. Faced with becoming a vampire, the creature she’s been raised to despise most, Isolde seeks other means of defying Adrian and surviving the grim politics and bloody strife of Cordova’s vampire court.

Isolde holds a terrible secret close to her heart and soul: it is not the court she fears most—it’s Adrian himself. Despite their undeniable chemistry, she wonders why the king—fierce, savage, merciless—chose her as consort. The answer will shatter her world.

Scarlett St. Clair is the bestselling author of the Hades X Persephone Saga, the Hades Saga, King of Battle and Blood, and When Stars Come Out. She has a Master's degree in Library Science and Information Studies and a Bachelors in English Writing. She is obsessed with Greek Mythology, murder mysteries, and the afterlife.

Scarlett, who received a Gates Foundation scholarship to pursue her studies, continues to advocate for librarians and teachers. She is of Muskogee heritage, a part of the Creek Nation, and is an advocate for diverse representation in books.

Gwenda Bond is the New York Times bestselling author of many novels, including the Lois Lane and Cirque American trilogies. She wrote the first official Stranger Things novel, Suspicious Minds. She also created Dead Air, a serialized mystery and scripted podcast written with Carrie Ryan and Rachel Caine. Not Your Average Hot Guy is her first romantic comedy for adults.

Her nonfiction writing has appeared in Publishers Weekly, Locus Magazine, Salon, the Los Angeles Times, and many other publications. She has an MFA in writing from the Vermont College of Fine Arts. She lives in a hundred-year-old house in Lexington, Kentucky, with her husband and their unruly pets. She believes she may have escaped from a 1940s screwball comedy.

A Touch of Darkness (Paperback)

Not Your Average Hot Guy: A Novel (Match Made in Hell #1) (Paperback)