Shane Croston signing The Society of the Banana in Ohio: A History of the Black Hand 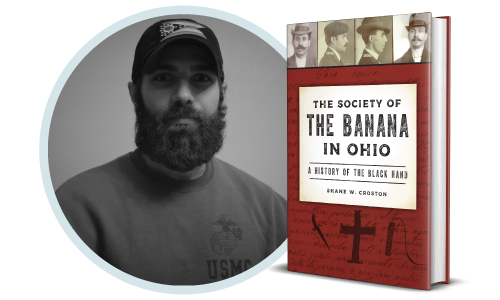 Shane Croston signing The Society of the Banana in Ohio: A History of the Black Hand

Saturday, November 5 at 11am ET

Join us for Shane Croston signing The Society of the Banana in Ohio: A History of the Black Hand.

A notorious case of terror and extortion in the Buckeye State

In the early 1900s, a criminal society known as the Black Hand became feared across the United States as it extorted hard-working immigrants. In 1908, Agostino Iannarino received a series of threatening letters and when he refused to pay, a bomb exploded at the entrance of his Columbus home. His family fled to Sicily only to continue receiving threats. The following year, U.S. Post Office Inspectors learned that a Black Hand gang called the Society of the Banana was headquartered in Marion, Ohio, and authorities attempted to put an end to the violent outrages occurring across the Midwest.

Revealing twenty-four extortion letters written by members of the Society of the Banana, author Shane W. Croston details factual and fatal accounts of the Black Hand.

Shane Croston is a native of Bellefontaine, Ohio. He is a veteran of the U.S. Marine Corps and served as an anti-tank missileman with First Battalion, Eighth Marines. He holds a Bachelor of Arts degree in social studies from Dublin Business School (Dublin, Ireland). Shane's interests include military history; traveling abroad; and the study of social and cultural dynamics in Europe, the Greater Middle East and the Appalachian region of America. As a descendant of Tony Vicario, Salvatore Cira and Agostino Iannarino, he is interested in Sicilian genealogy and history pertaining to the Black Hand.