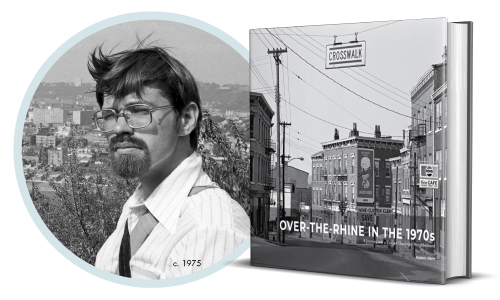 Join us for a special signing with Stephen Albert.

As a child passing through Over-the-Rhine by bus on his way downtown in the 1950s, Stephen Albert viewed the neighborhood’s ornate architectural features with loving eyes.  By the 1970s, like other 19th-century Cincinnati neighborhoods, Over-the-Rhine seemed doomed to fall before the wrecking ball.  Inspired by the work of Eugene Atget, who photographed the streetscapes and shop windows of Paris at the turn of the 20th century, Albert began to make a record of the area.  What he found, besides a treasure trove of Victorian buildings, was a treasure trove of people: a lively and diverse community in a classic urban neighborhood.  Residents spent much of their time in their doorways and on sidewalks, where Albert encountered them.  He began photographing people, mostly at their request and in poses of their own choosing, recording them in unexpected, unselfconscious, and revealing moments.

Ironically, almost fifty years later, the buildings of Over-the-Rhine have largely survived, but the vibrant community of working-class and working poor residents Albert knew is greatly diminished.  These photographs are his tribute to that community, that time, and that place.