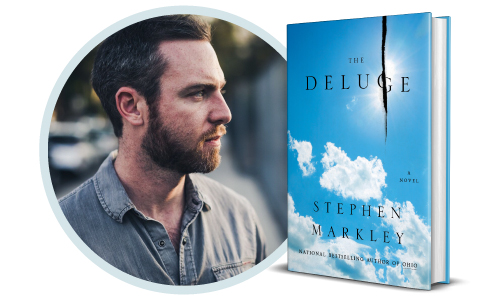 Join us for Stephen Markley discussing and signing The Deluge. Optional RSVP is below but not required to attend the event.

“This book is, simply put, a modern classic. If you read it, you'll never forget it. Prophetic, terrifying, uplifting.” —Stephen King

From the bestselling author of Ohio, a masterful American epic charting a near future approaching collapse and a nascent but strengthening solidarity.

In the first decades of the 21st century, the world is convulsing, its governments mired in gridlock while a patient but unrelenting ecological crisis looms. America is in upheaval, battered by violent weather and extreme politics. In California in 2013, Tony Pietrus, a scientist studying deposits of undersea methane, receives a death threat. His fate will become bound to a stunning cast of characters—a broken drug addict, a star advertising strategist, a neurodivergent mathematician, a cunning eco-terrorist, an actor turned religious zealot, and a brazen young activist named Kate Morris, who, in the mountains of Wyoming, begins a project that will alter the course of the decades to come.

From the Gulf Coast to Los Angeles, the Midwest to Washington, DC, their intertwined odysseys unfold against a stark backdrop of accelerating chaos as they summon courage, galvanize a nation, fall to their own fear, and find wild hope in the face of staggering odds. As their stories hurtle toward a spectacular climax, each faces a reckoning: what will they sacrifice to salvage humanity’s last chance at a future? A singular achievement, The Deluge is a once-in-a-generation novel that meets the moment as few works of art ever have.

Stephen Markley is the acclaimed author of Ohio, which NPR called a “masterpiece.” A graduate of the Iowa Writer’s Workshop, Markley’s other books include the memoir Publish This Book and the travelogue Tales of Iceland.