Steven Rosen discussing and signing Lost Cincinnati Concert Venues of the '50s and '60s: From the Surf Club to Ludlow Garage 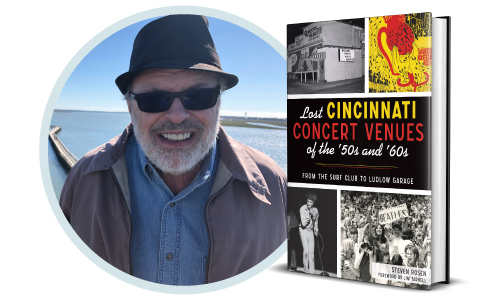 Steven Rosen discussing and signing Lost Cincinnati Concert Venues of the '50s and '60s: From the Surf Club to Ludlow Garage

Join us for Steven Rosen discussing and signing Lost Cincinnati Concert Venues of the '50s and '60s: From the Surf Club to Ludlow Garage.

Cincinnati in the ’50s and ’60s offered a stunning array of live music and entertainment venues. Although many of them no longer exist, their memories live on. Fulfilling an “obligation” to mobsters, blues crooner Charles Brown played a residency at the Sportsman’s Club in Newport. Incendiary comedian Lenny Bruce performed at the Surf Club on the city’s conservative west side. Jim Tarbell’s short-lived but iconic Ludlow Garage became a major stop on the national “ballroom” circuit that grew up around rock ’n’ roll as it matured into its progressive, experimental era. Signaling an end to the ’60s, Iggy Pop created a sensation at the 1970 Cincinnati Summer Pop Festival at Crosley Field. Join seasoned journalist Steven Rosen on a tour through historically heady days in the Queen City’s music scene.

Steven Rosen has worked for the Cincinnati Enquirer, Denver Post, Cincinnati CityBeat and other newspapers. Among his assignments, he served as the Arts & Culture editor at CityBeat and the art and film critic (and a music writer) at the Post. As a freelancer, he has written for Cincinnati Magazine, the New York Times, the Los Angeles Times, the Boston Globe, American Songwriter, Documentary Magazine, IndieWire, Variety, Blurt, Rock & Roll Globe and other outlets. He also founded National One Hit Wonder Day and started a music fanzine called One Shot. He is a member of the Cincinnati Vinyl Club and the Rock & Read Music Book Discussion Group. This is his first book.

Lost Cincinnati Concert Venues of the '50s and '60s: From the Surf Club to Ludlow Garage (Hardcover)