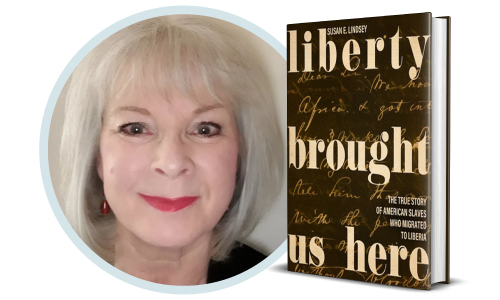 Join us for Susan Lindsey discussing Liberty Brought Us Here: The True Story of American Slaves Who Migrated to Liberia in collaboration with Kentucky Humanities, home of the Kentucky Book Festival. Purchase the book or sign up below to receive a link to this virtual event via email the day before the event.

Between 1820 and 1913, approximately 16,000 black people left the United States to start new lives in Liberia, Africa, in what became the largest out-migration in US history. When Tolbert Major, a former Kentucky slave and single father, was offered his own chance for freedom, he accepted. He, several family members, and seventy other people boarded the Luna on July 5, 1836. After they arrived in Liberia, Tolbert penned a letter to his former owner, Ben Major: "Dear Sir, We have all landed on the shores of Africa and got into our houses.... None of us have been taken with the fever yet."

Drawing on extensive research and fifteen years' worth of surviving letters, author Susan E. Lindsey illuminates the trials and triumphs of building a new life in Liberia, where settlers were free, but struggled to acclimate themselves to an unfamiliar land, coexist with indigenous groups, and overcome disease and other dangers. Liberty Brought Us Here: The True Story of American Slaves Who Migrated to Liberia explores the motives and attitudes of colonization supporters and those who lived in the colony, offering perspectives beyond the standard narrative that colonization was driven solely by racism or forced exile.

Susan E. Lindsey is a former resident of Kentucky now living in Portugal. In addition to writing Liberty Brought Us Here, she co-authored and edited Speed Family Heritage Recipes, a historical cookbook of recipes from the Speed family who built Farmington Plantation in Louisville. Lindsey has also published several essays and short stories. She is currently a contributor to Portugal Livingmagazine.

Liberty Brought Us Here: The True Story of American Slaves Who Migrated to Liberia (Hardcover)