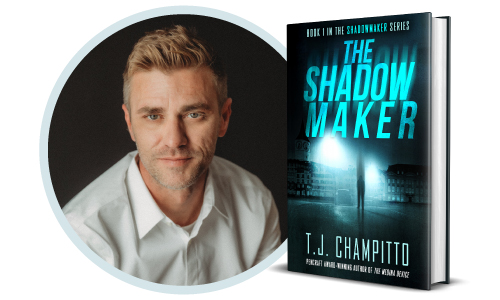 Join us for T. J. Champitto signing The Shadowmaker.

Henry Sirola is one of the world’s greatest art and jewel thieves, and an upcoming star in the Croatian mob. But Henry has a secret. He’s also an FBI informant, known only as The Shadowmaker. When a priceless treasure , seemingly lost to history, is plucked from the ocean floor, Henry’s two worlds are put on a deadly collision course.

The Shadowmaker is another international thrill ride from the acclaimed author, and the first book Champitto’s new series.

T.J. Champitto is the author of The Medina Device, which was given the 2020 PenCraft Award for literary excellence as well as the Maxy Award for Best Thriller. His debut has been published in over twenty countries around the world.

In 2020, The Medina Device became an Amazon Bestseller in the U.S. and was named one of Amazon’s Top 10 Movers & Shakers. Champitto’s latest novel, The Shadowmaker, is set for an October 25, 2022 global release, and is the first in a new series that follows one of the world’s greatest thieves.