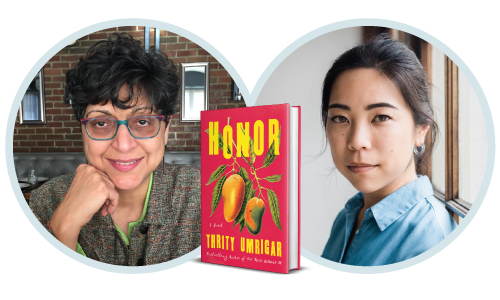 Join us for Thrity Umrigar in conversation with Alexandra Chang discussing Honor. Purchase the book featuring a signed bookplate or sign up below to receive a link to this virtual event via email the day before the event.

When a young Hindu woman is brutally tortured for marrying a Muslim man, and her husband murdered, Indian-American journalist Smita travels to India to cover the story of the young widow, Meena, and her attackers—her own brothers, who feel their sister’s forbidden marriage brought unforgivable shame to the family. Returning to Mumbai for the first time in twenty years, Smita sees a country entrenched in outdated beliefs about caste, religion, and patriarchy, a country where a woman can meet violence for exercising any amount of autonomy. But Smita’s harsh assessment of modern India is complicated by Mohan, a lifelong Mumbai resident with progressive ideals and a fierce love of his country who becomes her unofficial partner in her quest to bring awareness to the tragedy. As Smita works for justice on behalf of Meena and her infant daughter, she must also reckon with the privilege she now has as an American—and finally face the trauma that led to her own family fleeing India all those years ago.

Thrity Umrigar is the bestselling author of eight other novels, including The Space Between Us, which was a finalist for the PEN/Beyond Margins Award, as well as a memoir and three picture books. Her books have been translated into several languages and published in more than fifteen countries. She is the winner of a Lambda Literary Award and a Seth Rosenberg Award and is Distinguished Professor of English at Case Western Reserve University. A former prize-winning journalist, she has contributed to The Boston Globe, The Washington Post, The New York Times and The Huffington Post.

Alexandra Chang is the author of Days of Distraction. She currently writes and teaches in Philadelphia.