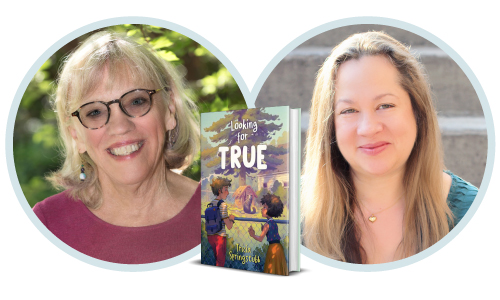 Join us for Tricia Springstubb in conversation with Jennifer Ziegler discussing Looking for True. RSVP below to receive a link to attend this virtual event.

When two unlikely friends bond over shared compassion for a bereft but lovable dog, they learn what it truly means to find a sense of belonging and identity.

11-year-olds Gladys and Jude live in the same small, rust belt town, and go to the same school, but they are definitely not friends. Gladys is a tiny, eccentric, walking dictionary who doesn’t hesitate to express herself, while Jude likes to keep his thoughts and feelings to himself. But they both agree that a new dog in the neighborhood is being mistreated by its owner.

Gladys would like to do something to help while Jude is more resigned to the situation until the dog (who Gladys has named True Blue) disappears. They hatch a plan to find her and once they do, realize they have a problem: Gladys’s father is allergic and Jude’s mother hates dogs. There is no way they can bring her home. They hide True Blue in an abandoned house on the edge of town, but as their ties to the dog--and to one another--deepen, so does the impossibility of keeping such a big secret. Yet giving True up will break all three of their hearts.

Told in alternating voices set in a small, rust-belt town, True Blue is a story about family, identity, and finding friends in unexpected places.

Tricia Springstubb has written many well-reviewed books for young readers, including The Most Perfect Thing in the Universe and What Happened on Fox Street, which was an Indie Pick. She also wrote Every Single Second which received starred reviews from Publishers Weekly and Kirkus Reviews. She lives in Cleveland Heights, Ohio.

Jennifer Ziegler is an author of books for young adults and middle graders, including How Not to Be Popular, Revenge of the Flower Girls, and Revenge of the Teacher’s Pets. She is on the faculty of Vermont College of Fine Arts’ MFA program on Writing for Children and Young Adults. Like Worser’s title character, she is a lover of words, word play, puzzles, libraries, and bookstores. Unlike Worser, she was never sent to the principal’s office. Jennifer lives in Austin, Texas, with her husband, author Chris Barton.