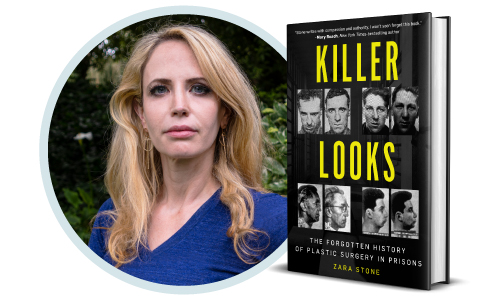 Join us for Zara Stone discussing and signing Killer Looks: The Forgotten History of Plastic Surgery in Prisons.

Killer Looks: The Forgotten History of Plastic Surgery in Prisons is the definitive story about the long-forgotten practice of providing free nose jobs, face-lifts, breast implants, and other physical alterations to prisoners, the idea being that by remodeling the face you remake the man. From the 1920s up to the mid-1990s, half a million prison inmates across America, Canada, and the U.K willingly went under the knife, their tab picked up by the government.

In the beginning, this was a haphazard affair – applied inconsistently and unfairly to inmates, but entering the 1960s, a movement to scientifically quantify the long-term effect of such programs took hold. And, strange as it may sound, the criminologists were right: recidivism rates plummeted.

In 1967, a three-year cosmetic surgery program set on Rikers Island saw recidivism rates drop 36% for surgically altered offenders. The program, funded by a $240,000 grant from the Department of Health, Education, and Welfare, was led by Dr. Michael Lewin, who ran a similar program at Sing-Sing prison in 1953.

Killer Looks draws on the intersectionality of socioeconomic success, racial bias, the prison industry complex, and the fallacy of attractiveness to get to the heart of how appearance and societal approval create self-worth.

Zara Stone is a full-time author and journalist. Her first book, The Future of Science is Female: The Brilliant Minds Shaping the 21st Century was written to encourage a 9-13-year-old audience into STEM. Her new book, Killer Looks: The Forgotten History of Plastic Surgery in Prisons, debuted in October 2021. Zara has written for The New York Times, Wired, Forbes, The Wall Street Journal, The Atlantic, The Washington Post, Fortune, Cosmopolitan, Vice, the BBC, ABC News, and CNN, among others. Her on-air experience includes a stint presenting technology news for Fusion, an ABC-News/Univision collaboration, and guest spots on the BBC and SKY News in the U.K.